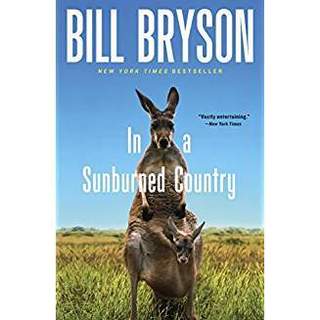 In A Sunburned Country is too new to be considered a classic and Bill Bryson certainly can’t be called a “little-known” writer, but I enjoyed this book so much I feel compelled to recommend it. I’ve long wanted to return to Australia, having visited only briefly, and Bryson’s book intensified my longing to go back and see everything I missed—or some of what I missed, at least. As the author’s journey makes clear, this country is so huge that even traveling for weeks over many miles, you will still manage only a small portion of the continent’s vast territory.

Bryson is an energetic traveler, moving vigorously in the book’s three sections to Australia’s outback, to its cities (the boomerang coast), and to “the edges” of the continent. Traveling by train, by car, or on foot, he takes in the well-known, the lesser-known, and the nearly unvisited, from Uluru (or Ayers Rock), to the magnificent jarrah and karri forests, to obscure, quirkily interesting museums. Along the way he conveys the nature of this country that, as he points out, we hear so little about: its immensity, its fascinating landscape, its unusual fauna and flora, and its open, easygoing society.

As you would expect from Bryson, he finds humor everywhere, especially in his own mishaps and in the extraordinary dangers the country seems to offer. He delights in the “Many Things That Can Kill You Horribly in Australia,” from venomous snakes, jellyfish, and insects to the brutal heat of the vast deserts. No doubt he overplays the risks to emphasize the challenge of the country and the equanimity of its inhabitants—and because these dangers provide great fodder for his humor.

Fortunately Bryson doesn't encounter any crocodiles, poisonous snakes, or funnel spiders. Indeed, he suffers nothing worse on this journey than a very bad sunburn and a few hangovers. Except for observations on the sad state of the Aborigines, this is an upbeat trip, filled with the wonders of Australia. Readers may feel tempted, as I did, to see the country for themselves—or at least to read more about it: Bryson offers a welcome bibliography.