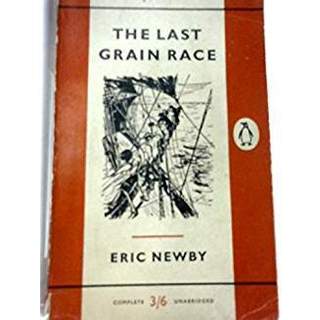 The Last Grain Race was Eric Newby’s first book, but it already has the essence of the travel works that would follow: the challenging journey, the wonderfully precise writing, the self-deprecating modesty, and, perhaps above all, the humor. In 1938, at the age of 18, fed up with his London job at an advertising agency and inspired by a friend’s eccentric father—who he is convinced was a member of the British Secret Service—he signed up as an apprentice on the Moshulu, a four-masted barque headed for Australia.

The Finnish-owned Moshulu, which left from Belfast, was one of the sailing ships that would pick up grain in Australia to carry back to Europe, and the return journey really was a race. In 1939, thirteen ships participated, including the Moshulu. As Newby says, although he didn’t know it at the time, this was to be the ship’s last voyage in the grain trade, and it was also to be the last of the races. His book not only records his own grueling if colorful experience, it takes us back to an era long gone.

As always, Newby writes with dry wit and he finds humor everywhere, even in his first terrifying climb “op the rigging,” and certainly in the Louis Vuitton trunk he brings on board that earns him the nickname “Bossuri,” which in Finnish means “landed proprietor.” With a crew that includes Swedes, Finns, Danes, and one Englishman, language difficulties abound, but Swedish is the working language of the ship. Newby learns the Swedish names of the sails from the sailmaker, one of the most interesting of the characters who populate the book: fifty-eight years old, he has spent forty-three of them at sea, and, when Newby first meets him, he is reading The Seven Pillars of Wisdom. “He had a wonderful smell about him,” Newby says, “compounded of hemp and Stockholm tar.”

I admit I was hesitant about reading The Last Grain Race. I think Newby is a terrific writer and I love his take on the world. But I know nothing about sailing, and I feared the book would be technical. In fact, some of it is technical and early on he advises the less interested reader to skip a couple of sections. And throughout, it would certainly help to be familiar with the terminology. There is a detailed plan of the boat, but I would have appreciated a glossary.

But I found that a technical understanding isn’t necessary to enjoy Newby’s story. The relationships among the wildly different (and, in some cases, wild) men, the dangers of the violent storms they encounter, the frustrations of being becalmed during a race, the importance of food, the awfulness of bugs in bedding, and, most of all, the strict routine—all of this comes to life as we, like the crew, become immersed in the life of the ship.