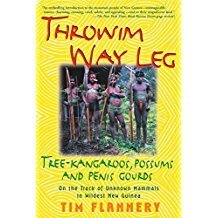 New Guinea is a wonderland of fauna and flora found nowhere else on earth, a paradise for an ornithologist, an entomologist, a botanist, or a zoologist like Tim Flannery. But to explore the country’s riches, the researcher has to deal with a seriously rugged terrain: dense bush, steep mountains and slippery descents, slimy logs bridging flooding rivers and deep ravines, extreme heat, and humidity so intense that, as Flannery says, “You can feel the fungus growing on your skin.” There is also the disease factor—malaria, dysentery, scrub typhus, altitude sickness. And then there is the fact that when you finally arrive at a village you have no idea whether the greeting will be friendly or hostile.

To take this on, the researcher has to be fit, intrepid, up for adventure, and passionate about his work. The Australian mammologist, Tim Flannery, though too modest to cast himself as hero, is all four. He is also a writer who can draw readers into both his fieldwork and his personal experience in prose that is at once plain and gripping.

Throwin Way Leg, in New Guinea Pidgin, means “to go on a journey,” and Flannery’s journey begins in 1981 when, at 26, his desire to go to New Guinea was at last fulfilled. His book recounts the various expeditions he made over 15 years, mostly to Papua New Guinea—the eastern half of the island—which was by then an independent country, but later to Irian Jaya, a province of Indonesia.

Flannery’s special interest is tree-kangaroos, but his observations and his hunts, carried out with the aid of many New Guineans, reveal numerous other animals as well: echidnas, possums, rats, Birds-of-Paradise, tiny pink frogs. One of the most exciting parts of the book involves his hair-raising efforts to capture and identify a bat that he believes might be Bulmer’s Fruit-bat, thought to be extinct for 12,000 years. (He proves to be right.) Although he discovers many new species, the high point of his career as a biologist, he says, is the discovery of Dingiso, a black-and-white ground-living tree-kangaroo, who is gentle, friendly, and, judging by the photo he provides, very cute.

Throwim Way Leg, though, is not only about animals. Fluent in Pidgin, Flannery becomes friendly with many of the New Guineans he works with, relying on their deep knowledge of local wildlife for his own work and respecting the great variety of cultures and customs he encounters. “How do we judge a person whose culture and attitudes we barely understand?” he asks. His own response is not to judge, even when confronted with a story of cannibalism that is truly alien. Flannery is clearly so open-minded and interested that people speak freely to him, and their personalities and stories are fascinating.

When Flannery arrives in Irian Jaya, however, he finds that unlike Papua New Guinea, where whites and New Guineans now work together and socialize comfortably, terrible racism and abuse are prevalent. The Indonesian government has taken the land, mined it for gold and copper, and shared none of the profits with the indigenous people, thousands of whom have been killed by the military the government has used to control them. Deeply upset at the mistreatment and death of a young boy, Flannery feels called upon to write about the human rights violations he witnessed, heard, and read about. His descriptions are insightful, disturbing, and moving.

Having lived in and written about Papua New Guinea, I’m always interested in the island, and I can’t understand how I missed this wonderful book when it appeared in 1998. So little is written about the country that it’s especially delightful to find this 20th-century tale of exploration that brings the island so colorfully to life.