Review: My Family and Other Animals 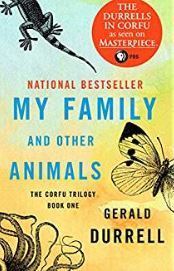 My Family and Other Animals (The Corfu Trilogy Book 1)
By Gerald Durrell. Kindle Edition.

It is easy to see why this book was popular when it was published in 1956 and has never been out of print. The story, somewhat fictionalized, of the four Durrell siblings and their mother in Corfu, where they lived from 1935 to 1939, is a delight. If Gerald is the centerpiece of the tale, all members of the eccentric family get their due, along with a cast of affectionately drawn oddball characters, some human and some not.

Gerald, age 10, was already a naturalist when he arrived in Corfu—it was in his bones. The island offered a wealth of fauna for him to explore and bring home, often to the chagrin of his family. Among them is Quasimodo, the pigeon adopted as a baby, who thinks he is human and refuses to fly—until he turns out to be a she, lays two eggs and rejects the family for a pigeon suitor. And there are two mischievous magpies, dubbed the Magenpies, who quickly map out the villa and are so intrigued by the bedroom of Gerry’s oldest brother—the novelist Lawrence Durrell—that they wait till he has left for a swim and then wreak havoc, going “through the room,” says Gerry, “as thoroughly as any Secret Service agent searching for missing plans."

Gerry depicts the foibles and interactions of his older siblings with a sharp eye—Larry, intellectual, somewhat pompous; Leslie, who thinks of nothing but guns; and teenage Margo obsessed with her looks. He is gentler with his mother, who oversees the menagerie, an extraordinarily tolerant woman. Though even she has her limits: scorpions are not allowed. But when Gerry finds a mother scorpion, babies clinging to her back, how can he resist sneaking her home in a matchbox? When Larry wants to light a cigarette, chaos ensues.

Chaos is intrinsic to this family whose constant bickering seems to be the fuel that keeps them going. One of the running themes of the book is finding a tutor for Gerry, who the family feels is running wild. But Gerry is not a student—except of nature—and his three tutors contribute more to the humor of the book than they do to his education. He is very lucky to be taken under the wing of the charming naturalist and philosopher Dr. Theodore Stephanides, a source of deep knowledge and puns.

Europe in the 30s was heading towards war, but political tensions play no part in My Family and Other Animals. I kept thinking as I read this idyll just how fortunate Gerry was to have this gorgeous fauna-filled island both as a playground in which to run free and as a training ground for his future career as a naturalist. And how fortunate too that he put aside his aversion to bookish things to write this one.