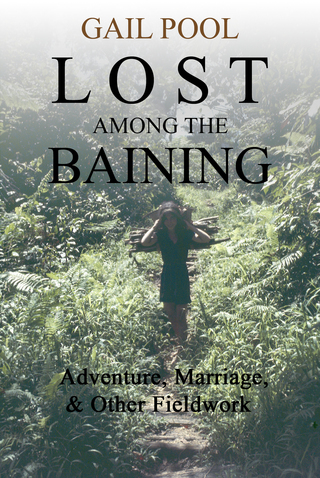 "An inherently fascinating and absorbing read, Lost Among the Baining is a remarkably well written, deftly organized, and impressively presented account from beginning to end."--Midwest Book Review 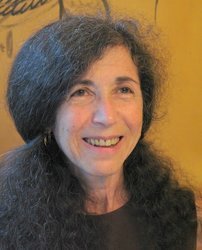 Lost Among the Baining: Photos 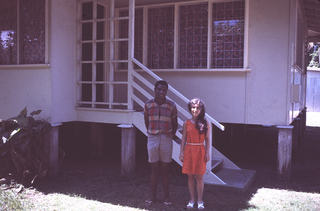 Here I am in my Marimekko shift with a friend outside the Australian National University House in Rabaul. I look about ten years old! 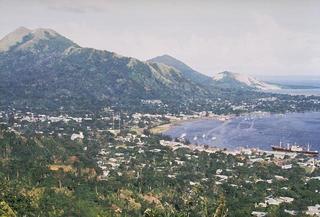 Beautiful Rabaul in 1969, a quiet, easy-going, almost magical place, before its destruction in 1994, when Tavurvur erupted and the town was buried in volcanic ash. 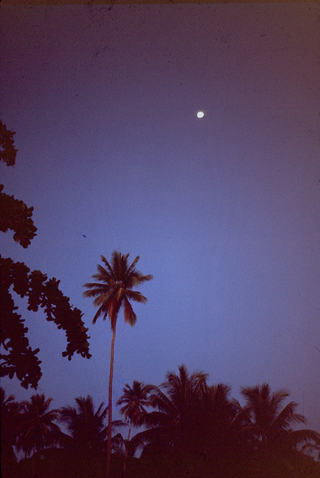 Vunamarita at dawn as we arrive by freight boat. 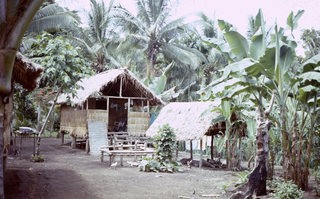 This is the house the Baining built for us in Puktas, the first village we lived in. 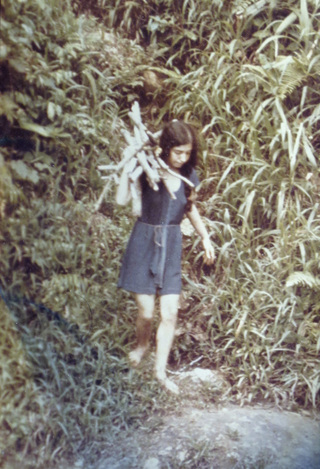 Here I am, in my trade store shift, belted with a string, carrying wood on my shoulder--the wrong way! 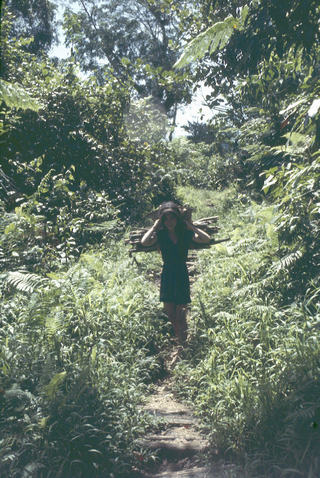 Gail carrying wood with her amalunga

And here I am, finally, carrying wood in the traditional Baining way. 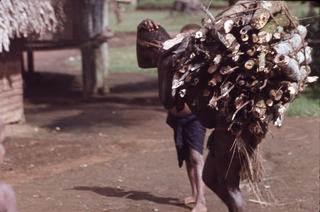 A bit more wood than I have in my load! 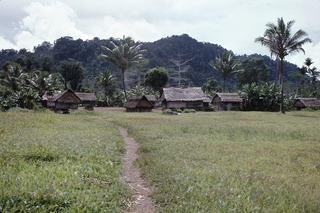 Of the various Baining mountain villages, we chose Wilaimbemki--the second village we lived in--with care. It was the largest of the villages, it was sufficiently remote to have remained traditional, and unlike Puktas, the previous village we had lived in, where small hamlets were scattered throughout the bush, it was centralized: we'd be close to other people, we'd see people all the time.

Things didn't turn out quite as we expected! 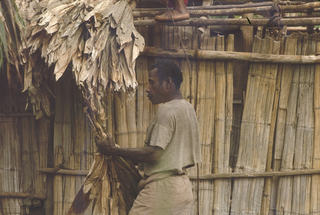 Kyimkyim helping to thatch a roof

Our closest neighbor Kyimkyim, with fronds to thatch a roof. He and his wife, Madeilas, watched over us carefully, making sure we had food and firewood. With nine children of their own, what were two fledglings more? 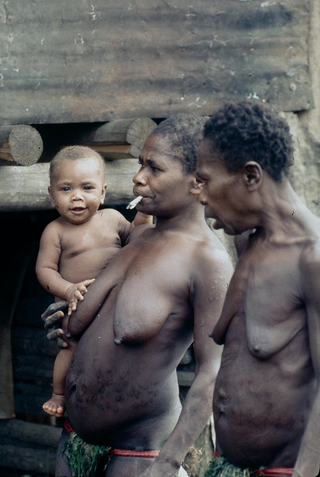 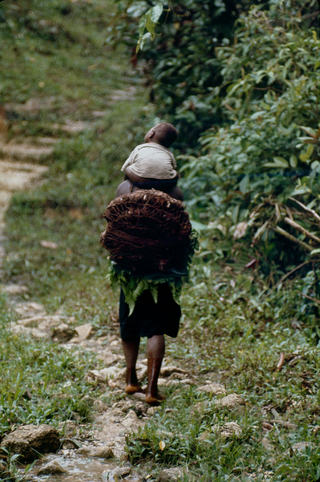 Our neighbor Madeilas returning from the garden with a bilum of taro and baby perched on top. 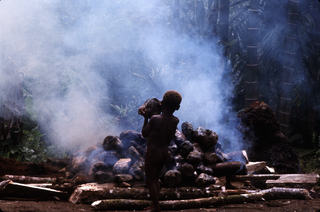 Heating stones to cook a pig at Baiki's death

While we were in Wilaimbemki, Kyimkyim's father, old Baiki, died. Here, they are heating stones to cook a pig for the feast that will follow Baiki's death. 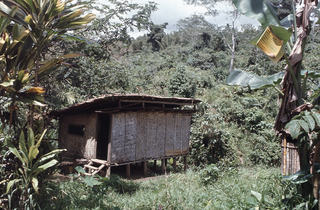 Here is our house in Wilaimbemki, on loan from a young man who would be away for the year. In contrast with the previous village--where we waited months for a house--this was already built and needed only repairs, which the villagers did at once. They secured the roof for the rainy season, partitioned off two rooms, built an outhouse. It was finished so quickly I was thrilled. 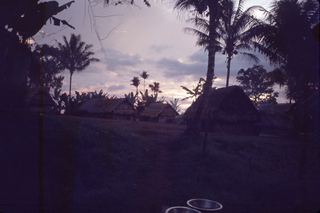 Sunset, just outside our hut. 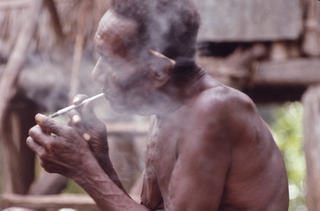 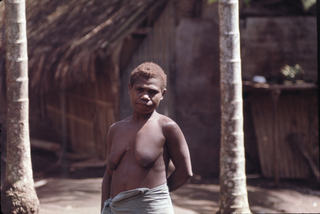 Tuvuan, our closest neighbor in Puktas, taught me how to cook taro. 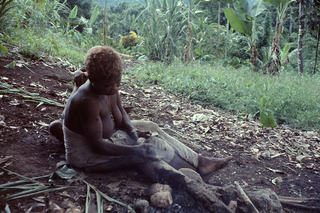 Taro--andumgi--is a source of great pride to the Baining, and they take pleasure in the many types, which so differ in size, in texture, and in taste that they remind me, in their variety, of cheese. 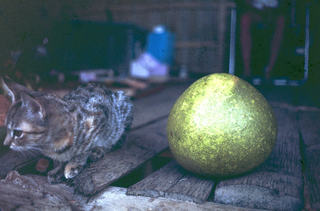 Loki, our kitten, no bigger than a grapefruit. We were told to get a cat to catch vermin, which we were warned would invade the hut. New Guinea, after all, is called an entomologist’s paradise. 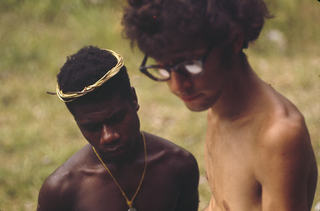 Here is Jeremy with young Tomamia, as we called him, to distinguish him from the elderly Tomamia. When we returned in 2008, Tomamia had died, but we met his daughter, who recognized him from the photo. 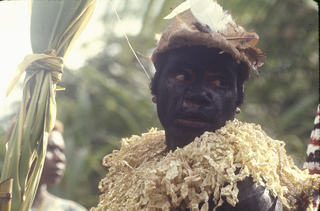 Langi, dressed for the spear dance. 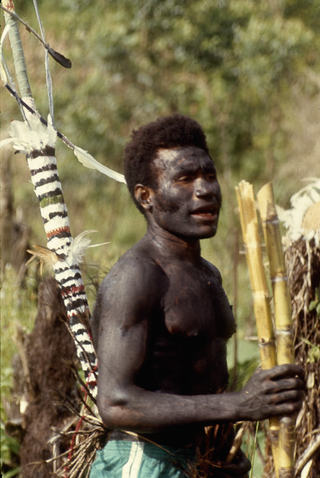 Solmet with bilas and spear

Our friend Solmet, just before dancing. 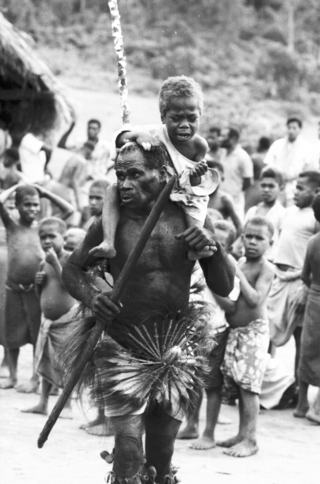 A Baining spear dancer with his child--a youngster who would clearly like to be somewhere else! 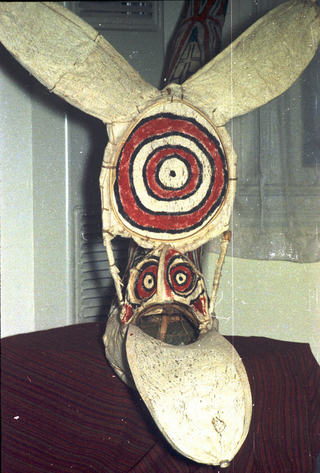 One of four amazing masks the Baining gave us to take home. All are now in the de Young Museum in San Francisco. 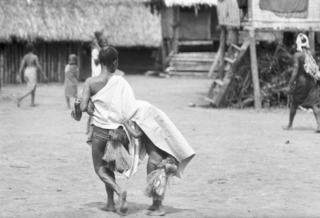 Woman with child at the day dance

At the day dance, while the men perform the spear dance and bring out masks, the women dance around them in a circle and sing. 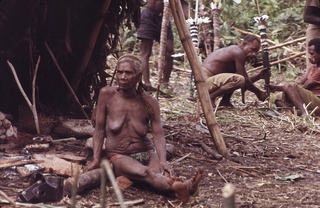 Men prepare the masks for the day dance--one of the few times that tasks are divided by gender in this remarkably egalitarian society. But even this division is not so strict: some women, like this lapun (or older woman) are present and may participate as well. 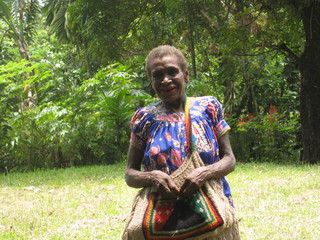 Kyimkyim's daughter,  in 2008.  We remembered each other from our visit 40 years earlier. 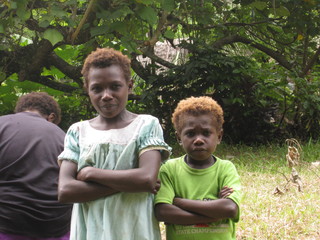 Youngsters enjoying a photo-op. What attitude! 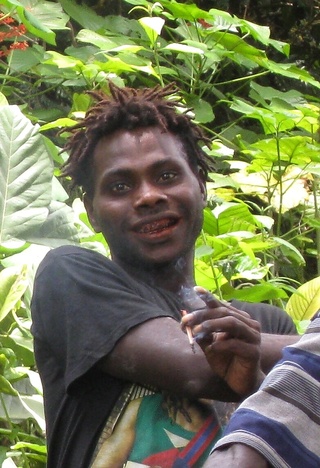