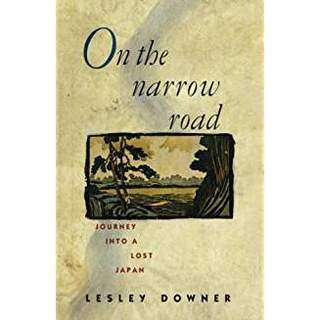 On the Narrow Road: Journey into a Lost Japan
By Lesley Downer
Summit Books, 1989, 280 pp.

In travel literature there is a strong tradition of writers following in the footsteps of earlier travelers: to try see what they saw, to in some sense share their experience, perhaps to see what has changed. In On the Narrow Path: Journey to a Lost Japan, Lesley Downer enters this tradition, following the path of the great Japanese poet, Matsuo Basho, who in 1689 set off on a 5-month, 800 mile journey to the “wild north” of Japan and in 1693 published The Narrow Path to the Deep North, a book studied and loved throughout Japan.

Basho’s purpose, Downer says, was poetic: he wanted to visit places that had inspired poets in the past. His journey was also “a pilgrimage to the places associated with Yoshitsune, the greatest and most loved of Japanese heroes.” Traveling nearly 300 years later, Downer’s own aims were to see if the old “wild” north—said to have disappeared—could still be found, and also to get close to Basho himself.

Her journey succeeds on both counts. Downer, a Briton who taught in Japan for five years, had been familiar only with the “civilized south.” But as she travels—on foot, by train, hitchhiking at times—she discovers that the old way of life has not disappeared. As she roams through rural villages, she finds an entirely different world of farmers and rustic ways, where life is slower and less efficient, where people wear smocks and baggy trousers, and where they speak in a heavy dialect she finds it hard to understand. In a small, unprepossessing village that she at first can hardly wait to leave, she finds a scholar and artists making verses together as Basho once did with students and fellow poets, and ends up staying nearly a week.

And unexpectedly, she finds this world more inclusive. It is not just that people welcome her. It’s also that, “All those little social niceties that are embalmed in the language and somehow prevent a foreigner from ever becoming part of the society, simply don’t exist here,” she writes at one point in her journey. “I felt more at home, less foreign, than I ever had anywhere in Japan.”

As Downer makes her way through dense, sometimes eerie, landscapes, she introduces us to Japanese customs, attitudes, ways of seeing, recounts legends about Yoshitsune, and not only finds Basho everywhere but brings him to life on the page: by quoting amply from his book and presenting numerous haiku written by him or by his traveling companion, Sora. The book is slow, but that seemed appropriate for this journey.

By the end, after Downer has reached the Sacred Mountains and has at last seen the yamabushi—the priests—she’d longed to see, I found myself wanting to read Basho’s own book and to learn more about haiku, so that I might better understand his enigmatic and wonderfully evocative poems.