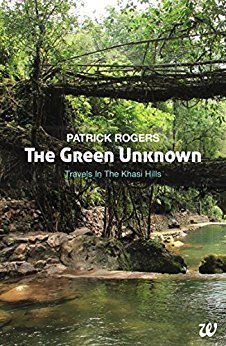 Rogers takes readers along as he travels from village to village, mostly on foot, in Meghalaya, an area that is small but diverse: language, customs, religion vary from one place to the next. From time to time Rogers meets someone who knows some English, but mostly he communicates piecemeal, in words he’s picked up from Hindi and dialects or, more effectively, by signs. This seems to work. He gets along well with the people he meets, who generously offer hospitality to a bedraggled foreigner—a Phareng—whose purpose in being there they probably find unfathomable.

The book’s style is casual, but Rogers’s travels—and travails—are strenuous. He navigates hair-raising terrain, encounters massive storms, eats things I suspect most of us would rather avoid—boiled tadpoles!—and he writes about it all with a nice self-deprecating humor.

The best parts of the book focus on his many quests to find bridges, and I especially enjoyed one excursion when he is accompanied by two entertaining and enterprising guides: a youngster of 17, named Morningglory, who is interested in promoting ecotourism; and an indefatigable fellow called John Cena, who has a deep knowledge of the local fauna and flora, as well as the ability to move agilely “up and down dangerous almost-vertical forest slopes, through impenetrable bamboo thickets, and along the edges of sheer precipices with only inches between himself and oblivion.” Rogers struggles to keep up—and upright—in his wake.

Rogers can’t—and doesn’t try to—provide a cultural overview of the region or in-depth information about living root bridges. He feels he doesn’t know enough, and as he makes clear, this is not a reference work. It's a personal account of Rogers's journeys, and an appreciation of the place and its people. But while I found his modesty refreshing, and am glad that he didn’t claim to know more than he does, I would have liked a clearer picture of life in the intriguing villages he visited, so apparently remote and yet not without cell phones.

Rogers is a good travel companion, and The Green Unknown is very enjoyable. Little seems to be known about the history of living root bridges, which are now disappearing, and I hope that this book, with its enthusiasm and terrific photographs, helps generate the interest and research needed for their preservation.