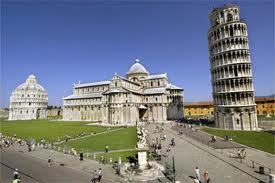 The leaning tower of Pisa

Misguided: The Elusive Truth
By Elizabeth Marcus, the author of Don't Say a Word, a memoir, and many wonderful essays on travel and other topics. For more of her writing, visit her blog, eLizwrites, and be sure to link to the Archive.

Once it was Baedeker or nothing. Now a slew of guidebooks compete for the privilege of answering the traveler’s every question. Usually I take along only one book, but on one trip to Northern Italy many years ago, I packed four: Fodor’s for the basics, Michelin for authoritative facts and maps, and, just in case our then-teenagers awoke from their adolescent comas and I struck a vein of curiosity, the more thorough Cadogan’s Tuscany and Umbria and Cento Citta by Paul Hofmann. It was an illuminating experience — but less for what we learned about Italy than for what was revealed about the books. With guidebooks as with cooks, it seems, it is possible to have too many.

All we wanted was a simple, clear account, but in Verona we began to realize we were getting more of a murky stew. Since both Jared and Zoë had read Romeo and Juliet in school, we headed straight to Juliet’s House, for an easy teachable moment. Standing under the balcony, we had to struggle to make ourselves heard over the din of competing tour-guide spiels. “Was it a true story?” Jared wanted to know, a question he has been asking in one form or another since he could form sentences. I had always assumed the play was pure fiction, but I thought I had better check my references.

To my surprise, Michelin treated the story as fact and the sites as real. Romeo and Juliet, it asserts, were from old Veronese families allied with the intensely rivalrous, medieval political factions: the Montagues with the Guelphs, the Capulets with the Ghibellines. Juliet’s house — at 23 Via Cappello — it declares unambiguously, “belonged to the Capulet family.” That Verona was contentiously divided for several centuries is well known, but is there actually documented evidence for these families? If so, the story could well be true. After all, what is more common than two kids falling in love across sociopolitical boundaries and making a hash of their elopement?

Fodor’s came down clearly on the side of fiction and didn’t even mention Juliet’s house. Since Verona is outside the geographic scope of my Cadogan, I checked out Paul Hofmann. His book doesn’t mince words: “The places are all spurious.” According to him, Verona has been promoting these phony sites to maximize tourism ever since the era of the Grand Tour.

Befuddled, I read on. Shakespeare, Hofmann points out probably “never saw the city” but his choice of “Verona as the setting for a drama on family feuds and youthful passion was sheer genius.” Whose genius? Certainly not Shakespeare’s. It is well documented that he cribbed his story, including its setting, from earlier French and Italian sources, one of which even supplied the names Romeo and Julietta. If Hofmann didn’t know that, how could he be sure the play had no historic basis? After all, the sites might be fake and the story “true.” One or more of these books was wrong. But which one?

On to Pisa, which I hoped would have a less confusing story to tell. The Field of Miracles, the gorgeous composition of Romanesque buildings of which the Leaning Tower is part, was aswarm with guided tour groups. Surely nothing about this famous belfry could be unknown. There really was only one obvious question: “Why does it lean?” I thought I knew the answer but checked my books to be sure. Beginning with Michelin, I read that the leaning —13 feet out of alignment — is due to “the settling of the alluvium subsoil, which lacks the resistance to withstand the weight of the tower.” Just as I thought: terra infirma. Hofmann’s comments on the leaning — 15 feet out of alignment — agreed at least on the cause.

What could Fodor’s add? “…the lopsided settling began when construction reached the third story. The tower’s architects attempted to compensate by making the remaining floors slightly taller on the leaning side, but the extra weight only made the problem worse.” Could this be true? The buildings of the Field of Miracles are masterpieces of Romanesque architecture. Would architects of such genius have come up with such a shortsighted solution? “It’s not a very big tower. Why didn’t they just start over and fix the stupid foundation?” Zoë demanded.

Maybe Cadogan could clarify. But no. “The architects who measured the stones in the last century … concluded that the tower’s odd state was absolutely intentional from the day it was begun…” The Pisans, the book contends, keep up the myth of unintentioned leaning in order to spare themselves “civic embarrassment.” “I don’t get it,” said Michael. “Why is it embarrassing if it’s intentional, but not if it is accidental? Shouldn’t the reverse be true?”

Reading on, we were told that, in fact, all the buildings in the Field of Miracles incline, that at the time it may have been thought that vertical construction was “trite.” Trite? Too confused to see straight, we could not determine if, in fact, the other buildings were out of whack or not. But even if they were, wouldn’t a more plausible explanation be that the subsoil of the whole area was weak? If, on the other hand, the buildings were intentionally non-vertical and were, therefore, constructed of angled stones, wouldn’t that be universally known?

We took to dividing the books among ourselves and reading for conflict of opinion. In Siena we learned that the Mangia Tower is either 289 or 332 feet high and that the Gaia Fountain was completed in 1419 and unveiled in 1348; in Padua that the 34 or 38 frescoes by Giotto were painted over two, four, or five years between 1302 and 1310.

The climax of the Great Guide Book Debate came in San Gimignano, the high-walled, medieval Tuscan town famous for its numerous towers. Perforated with brick-sized openings and as skinny and stark as Pisa’s is rotund and ornate, they looked more like dysfunctional square smoke-stacks than anything else. What could they have been used for?

According to Fodor’s, they were essentially for defense, as Jared read, “a safe refuge and useful for pouring boiling oil on attacking enemies.” Furthermore, “today 14 towers remain, but at the height of the Guelph-Ghibelline conflict, a forest of more than 70 such towers dominated the city.” Were the little holes for dispensing oil?

Cadogan had no explanation for the holes but did tell us, as Zoë read, that once all Tuscan towns were full of such towers. San Gimignano, it claims, is unique only in that 15 of its towers survived. Cento Citta did not mention the holes but, as Michael read, it noted that, of the 13 remaining towers, many lean.

That left only me and Michelin, whose explanation won hands down for originality. It seems that it was once thought that the towers were for self-protection and that the holes were for throwing gangways between the towers, enabling allied nobles to meet in times of danger. Now, however, there may be a “simpler explanation,” according to which the towers were built to protect a precious yellow-dyed cloth, the basis of the town’s economy, from the sun and dust. The long panels of fabric were hung inside the towers since the town lacked sufficient room for spreading it out. The openings apparently played some part in a stair system that wrapped around the outside of the towers, leaving the space inside free.

This explanation left us with new questions. Why not just roll up the cloth? If the holes were for attaching an exterior stair why didn’t they follow a climbing spiral pattern? If, on the other hand, the holes were for attaching gangplanks, how, lacking doors, did the nobles get out onto them? If Michelin was right about the unique, yellow fabric, Cadogan was wrong about the dime-a-dozen towers. Or maybe they were both wrong.

If nothing else, however, one thing was becoming clear: the case for traveling with only one guidebook. A family trip is not the best moment to negotiate the fuzzy frontier between fact and fiction, to grasp a simple truth only to find it sinking into a subsoil of ambiguity, or to have revealed, inside an apparent tower of fact, a wavering fabric of confusion. Deciding where to have lunch is usually challenge enough.