Review: Turn Right at Machu Picchu: Rediscovering the Lost City One Step at a Time 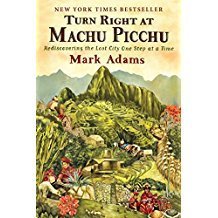 Turn Right at Machu Picchu: Rediscovering the Lost City One Step at a Time
By Mark Adams. Penguin, Plume, 2012, 333 pp.

Between 1911 and 1915, Hiram Bingham, Yale professor and swashbuckling explorer, made three trips to Peru, where he came upon the ruins of the Inca empire, then largely unknown to the outside world. A century later, explorers and archeologists are still trying to understand these sites, constructed to align with the sun, stars, and one another, and to comprehend something about the superb engineers who built them.

Mark Adams is not an explorer. As he tells us at the start of his book, he has not even been much of an adventurer. Indeed, though he worked at Adventure magazine, which ran articles on “extreme expeditions,” he himself “had never hunted or fished, didn’t own a mountain bike and couldn’t start a fire without matches if ordered to do so at gunpoint.” Married to a Peruvian woman, he had been to Lima many times, visiting her family, but he had rarely traveled outside the city. Reaching the age of 41, he decided it was time: he would follow Hiram Bingham’s route through the Andes to Machu Picchu.

Turn Right at Machu Picchu alternates between the story of Bingham’s explorations and Adams’s own, and though the former carries the historical weight, both are engaging.

With Adams, we are on the ground, as he visits such Inca sites as Vitcos, Vilcabamba, Llactapacta and offers various expert theories on their significance; relates the history of the Spanish conquest and the Inca resistance; and describes the magnificent landscape. It’s an arduous journey. Although a novice, Adams decides not to take the touristic trip and hires as guide John Leivers, a rugged Australian who knows the area and seems able to leap mountains at a single bound. Indeed, he considers Bingham himself “a bit of a martini explorer.” Through Leivers, an interesting character, Adams comes to understand how individual sites are linked up by their alignment: the “sites and trails were…like organs and vessels, the circulatory system in a living body.”

In a sense, Hiram Bingham is the main character in the book. Adams chronicles the life of this ambitious, charismatic man from his childhood through his years as a famous explorer and Yale professor, his subsequent entry into politics, his final trip to Machu Pichu and last book, Lost City of the Incas, published in 1948, eight years before he died. Adams seems fair in his depiction of Bingham’s flaws and achievements. He makes it clear that it was Yale that for years fought the return of the Inca artifacts Peru demanded, not Bingham, who knew that he had got them only on loan. But Bingham’s egotism shines out in his last book which, Adams tells us, failed to give credit to anyone for the “discovery” of Machu Picchu, though many deserved it.

Adams takes on the questionable concept of “discovering” a place that is already known to the people who live there. He concludes that what Bingham did was “ultimately much more important than discovering Machu Picchu. He saw the ruins, quickly determined their importance (if not their origin) and popularized them to a degree that they couldn’t be blown up with dynamite or knocked over in the search for buried gold, as Vitcos had been.”

Turn Right at Machu Picchu is an enjoyable book, its information made accessible through short chapters, humor, and an easygoing prose style. I confess I found myself geographically confused at times and forgetful of the many site names, and it was helpful that Adams provided a glossary and map as well as a chronology and index. Like Hugh Thomson’s A Sacred Landscape, which I reviewed a few years back (see November 2013), this book makes it clear that the Incas had an extraordinary culture—though we still have little real knowledge of what that culture was.