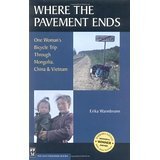 Where the Pavement Ends describes an impressive journey. Traveling alone, with her bike—which she calls Greene—Warmbrunn covers 8000 kilometers in 8 months. She set out, she tells us, because she’d failed in her aspirations to have an acting career, and she wanted to get away. But it is clear from this book that she also wanted to experience something new. A natural traveler, open to adventure, she throws herself into the experience fully.

As the book progresses, through China and Vietnam, she expresses her increasing exhaustion, her increasing need for time alone—away from the people crowding to see the foreigner—and her frustration at a less-than-friendly response to her presence, especially in Vietnam, where children are openly hostile. The Seven Questions wear thin.

This is a warm and honest book. Because it is essentially a travelogue, dependent more on the line of the journey than a strong narrative, it seemed to me to lack momentum. What makes the account rewarding is not just the author’s openness to experience, but her ability to observe that experience. Warmbrunn is a perceptive traveler, extremely sensitive to her own and others’ responses. And of course, there is the remarkable feat of the journey itself.