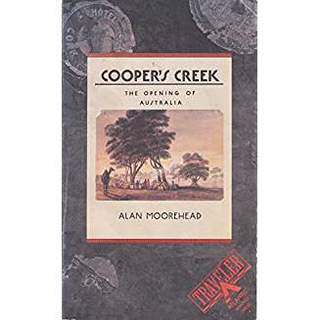 Reading accounts of disastrous journeys—so abundant in tales of early exploration—I find it hard to decide which disasters seem the most poignant: the ones caused by human failings or those determined by chance. Both types play a role in Cooper’s Creek, Alan Moorehead’s gripping story of the Burke and Wills expedition into the center of Australia, a vast region of rugged climate and terrain, where summer temperatures can reach 150 degrees, so hot that a match dropped on the ground can ignite.

Sponsored by the Royal Society, the expedition set off from Melbourne in 1860, a caravan of wagons, horses, 27 camels, and an excess of provisions—including rum for the camels! Slowed down by supplies, troubles with the animals, and dissension among the men, Burke made a fateful decision: to split the group. While he, with seven men, forged ahead to Cooper’s Creek, more than 400 miles to the north, to establish a depot near permanent water, he left a fellow named Wright in charge of a contingent in Menindie, with instructions to follow with the heavy provisions once the animals were rested.

At Cooper’s Creek, Burke, who had no experience of the Australian bush, made another fateful decision: against warnings not to travel in summer, he set off in December with his assistant Wills and two others to explore the interior and, he hoped, reach the sea. He told Brahe, the man left in charge, that he was sure he would return within 3 months, but left vague just how long he should wait.

As it turned out, Wright never came through. And Brahe, after four months, with his own men ill and dying and the provisions he hoped to leave for Burke—should he return—diminishing, abandoned Cooper’s Creek. The very day he left, Burke’s party—now just three—arrived, starving, exhausted, and clothed in rags, to find the place deserted. They struggled on, but only one man survived, cared for by the Aborigines, who are presented with a condescension unthinkable today but who emerge nonetheless as strong and sympathetic.

Human failings abound in this tale: Wright’s nonappearance, Burke’s midsummer timing, the Royal Society Exploration Committee’s neglect of the expedition they had set up. But unforgettably, there is pure chance: if only Brahe had waited one more day.

Moorehead is a wonderful storyteller. An Australian himself, he has been through this territory and knows its deserts and plains, its brutal, enervating climate, its wildlife and beauty. Drawing on surviving journals, letters, newspaper interviews, and the testimonies at the hearing that followed the tragedy, he vividly recreates the expedition, charting Brahe’s struggles, Wright’s strange inertia, and above all the Burke group’s incredible journey of endurance—a journey that even on rereading, I’ve found, doesn’t lose its tension. Indeed, against all intelligence and reason, I find myself hoping that this time, things will turn out differently.