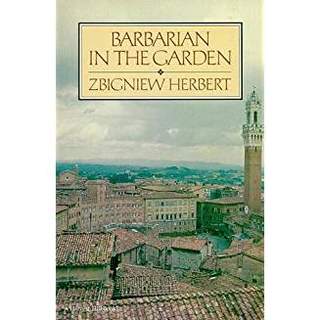 In Barbarian in the Garden, Zbigniew Herbert creates his own idiosyncratic Grand Tour. In Lascaux, Arles, and Albi, in Siena, Orvieto, Arezzo and San Sepolcro, the Polish poet, an Eastern European, seeks to apprehend the origins of Western culture.

Herbert’s journey, he observes, was twofold. The first “was real—a journey through towns, museums and ruins. The second—through books about the places I visited.” In these ten essays, he gives readers both the experience of being there, in the present, and a historical perspective on what we encounter.

Herbert, the consummate traveler, is alive to everything around him—the people, the landscape, and the food, the architecture and the art. He is not one of those tourists he comes across in Siena, so busy photographing, “so absorbed with producing copies that they have absolutely no time to see.” He is determined not just to see, but to see things new, to find his own viewpoint and reach his own judgments.

In Chartres, “instead of writing about stained glass modulating light as Gregorian chant modulates silence,” he writes about the cathedral’s construction, about stone, “an accountant’s view of the Gothic.” Among painters, he chooses as his favorite Piero della Francesca, “one of the most impersonal, supra-individual artists in history.” Piero, he writes: “hides so thoroughly behind his paintings and frescoes that one cannot invent his private life, his loves and friendships, his ambitions, his passion and grief…His entire being is in his oeuvre.”

Herbert’s private life is absent too in these essays. And yet they feel intensely personal, a quest revealing the mind and morals of the man: His love for the harmony of Dorian architecture. His scorn for the townspeople of Arles who petitioned to lock away the “madman” Van Gogh, and refused to buy his paintings. And, in two powerful narratives, his hatred of the police-state tactics that crushed the Albigensians and the Templars—tactics he knew firsthand as a resistance fighter in World War II and later in post-war Poland.

For Herbert, travel is an historical endeavor: the past is as living as the present. These essays, demanding and wonderful, convey a deep sense of places and the people who have inhabited them, what they have created and what they have destroyed.