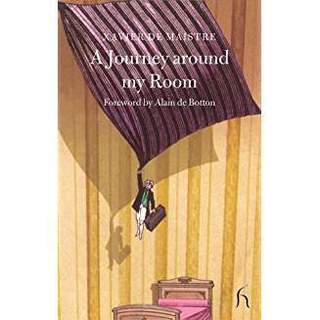 “People travel to wonder at the height of the mountains, at the huge waves of the seas, at the long course of the rivers, at the vast compass of the ocean, at the circular motion of the stars, and yet they pass by themselves without wondering.”
―Saint Augustine, Confessions

A Journey Around My Room and A Nocturnal Expedition Around My Room
By Xavier de Maistre. Translated and with an introduction by Andrew Brown. Foreword by Alain de Botton. First published in 1795. Hesperus Classics, 2004, 138 pp.

The 18th-century French writer Xavier de Maistre, under house arrest for 42 days, with only a servant and his beloved dog for companions, cleverly transformed the experience into a kind of travelogue: the destination, his bedroom; the sights, everything within it; the commentary, his observations and philosophical musings.

Partly a satire on travel writing, partly an essay on life, A Journey Around My Room was extremely popular in France when it appeared in 1795. Indeed, it inspired a sequel, A Nocturnal Expedition Around My Room, which has the author hanging out his window, contemplating the stars as well as an enticing woman on a neighboring balcony.

De Maistre’s room, he notes—in travelogue style—is located on the 45th degree of latitude and stretches from east to west. As he introduces us to his bed, his desk, his paintings and engravings—each item a source of reflections—his tour is as digressive as his ruminations. He may be heading for the door, but when he comes to his armchair, he is happy to sit down on it and contemplate the delights of an armchair. “My soul is so open to every kind of idea, taste and sentiment,” he observes. “And why would it turn down the pleasures that are scattered along life’s difficult path?”

De Maistre, who was living in Turin, avoiding the aftermath of the French Revolution, is an intelligent commentator and a shrewd writer. His reflections about life and people can be witty and insightful. He can also be longwinded. But he is alert to the charge. “Don’t let anyone start telling me off for being prolix in my details: all travellers behave the same way,” he says, remarking that they report the smallest details, “the number of people, the number of mules, the quality of the provisions, the excellent appetite of the travelers…” Why, on this fanciful journey, shouldn’t he do the same?

Having found great pleasure in his journey, De Maistre urges others to travel as he has, pointing out the many advantages of the mode : those who are sickly will have no bad weather to contend with; the cowardly “will be safe from robbers; they will encounter neither precipices nor quagmires.” And it costs nothing!

Most important, of course, it opens the traveler to the world around him, enabling him to see what has become invisible through familiarity and to think in fresh ways. Certain persons, the author says, “have forbidden me to roam around a city, a mere point in space; but they have left me with the whole universe: immensity and eternity are mine to command.”