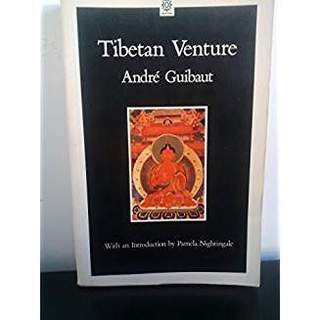 
When Andre Guibaut and Louis Victor Liotard reached Tibet in 1940, they were headed for a region of the country that was unmapped and largely unknown to the western world. This was their second expedition to Tibet, but the first to the high plateaux inhabited by nomadic herdsmen notorious for their brutal hostility to intruders.

The aims of the mission were geographical and anthropological, and Tibetan Venture covers both aspects of the journey. But the heart of this gripping book is the death of Liotard, who was shot by bandits, leaving Guibaut at once grieving for his close friend and fearfully alone in an alien and dangerous land.

Guibaut conveys the explorers’ excitement as they set out on their journey. “We are at the end of the world—of our world—and on the fringe of a new one,” he writes. He is drawn to the desolate splendor of the land and driven by the challenge of discovery: “We must find out all we can.” Trained in ethnology, he is fascinated by Tibetan customs and the pervasive spirituality, and he is eager to understand the fierce Ngolo tribe of the plateaux, so different from the farmers of the valleys.

But from the first, the expedition’s mood is unsettled. Before setting out, the men learn that France has fallen to the Germans, news that infuses the mission with patriotism but also tinges it with sorrow. And gradually the journey grows ominous. Mishaps occur. There are delays. A sinister group of horsemen appear and reappear. Finally, at a pass, brigands ambush the group and among those killed is Liotard. Distraught, disoriented, Guibaut, accompanied by two guides—one badly injured—makes his way to a monastery, where the lamas organize his passage to safety.

Guibaut is a superb narrator: intelligent, self-aware, humane, honest, and keenly observant. He is a sophisticated writer and his open acknowledgement that he is telling a story intensifies the narrative’s power.

“When one reflects upon the circumstances of well-known exploring disasters,” he says, “…one is sometimes amazed at the apparent acquiescence of leaders of expeditions in the decrees of fate. Each time it seems that they have been driven to the crisis, at the very place where it was fated they should die, like lambs led to the slaughter. One is over-inclined I think to criticize these expeditions in a ‘wise after the event’ manner and to study them like Greek tragedies, forgetting that, though the author of a play may know in advance how it will end, the actors of these real dramas who write them by their deeds, know nothing of the ultimate turn of events.”

As Pamela Nightingale says in her introduction, Guibaut’s story has been rendered still more poignant by the events which have occurred since the book was written—by the Communist takeover of Tibet and the destruction of the monasteries, the shrines, the spirituality so vital to Tibetan life. The world described in this moving book has disappeared.