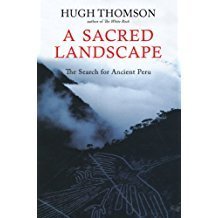 “The real voyage of discovery consists not in seeing new landscapes, but in having new eyes.”
―Marcel Proust

A Sacred Landscape: The Search for Ancient Peru
By Hugh Thomson. Overlook, 2007, 330 pp.


For decades people have lamented the death of real travel, complaining that there are no new discoveries to be made in our much-traveled, well-known world. Hugh Thomson offers a different perspective in A Sacred Landscape, warning against complacency about the extent of our knowledge. Indeed, in Peru, where excavation has been slow, monuments and artifacts of the most ancient civilizations have only recently begun to emerge, offering glimpses of the fascinating cultures that are the focus of this book.

A Sacred Landscape follows a year Thomson spent in Peru, but it reflects his work in the country over 25 years and spans 5000 years of Andean history. His story begins with Llactapata, an Incan site first reported in 1912 by Hiram Bingham, the American explorer who discovered Machu Picchu, and visited in 1982 by Thomson himself. Still puzzled twenty years later by the discrepancies in their findings, Thomson organized an expedition to explore the whole area.

But in the process of working out the extent and significance of Llactapata, Thomson came to feel he couldn’t understand the Incas without more fully understanding the Andean civilizations that had preceded them. In his quest to comprehend the “Pan-Andean, shared culture,” he decided to investigate these earlier civilizations.

Circling back from Llactapata, Thomson’s narrative guides us to Caral, with its evidence of a peaceful people, focused on trade; to Cerro Sechin, with its “shockingly violent” frieze, comprising “around 350 monumental stone figures”; to the Pyramids of the Sun and the Moon built by the “exuberant and colorful” Moche, who left behind remnants of human sacrifice as well as extraordinary ceramics, some depicting explicit erotic activities; to Chavin, with its jaguar heads, whose features suggest a cult using psychotropic drugs; and to Nasca, with its geoglyphs, the famous Nasca lines. As Thomson observes in his introduction, “Ancient Peru was a place full of wild energies.”

Combining on-site descriptions with in-depth research, Thomson offers various possible interpretations of the findings, whose meaning, without a written record, we can only partly grasp. Throughout, he emphasizes the landscape, so important to Andean myth.

Informative as it is, this is a personal book, filled with anecdotes—about Thomson’s companions, various archeologists who help him, and his family, who join him in Peru—and permeated by his passion for his work. Thomson is an explorer, willing to hack his way through jungle or to attend the most extreme of all Andean festivals, the Qoyllurit’i pilgrimage, with its midnight vigil on a glacier. He is an excellent guide, thorough in his descriptions, and neither judgmental nor sensationalist in his presentation of the intriguing cultures that are being unearthed in what, “it now seems, was the cradle of civilisation in the Americas.”