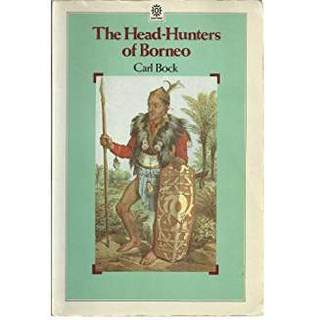 The Head-Hunters of Borneo: A Narrative of Travel Up the Mahakkam and Down the Barito. Also: Journeyings in Sumatra.
By Carl Bock. Introduction by R.H.W. Reece. Oxford University Press, 1986 (USA), 360 pp.


In the 1980s travel literature became so popular that publishers, while bringing out new titles, also began to reissue old ones. Surveying the genre’s rich and curious past, they sought out books that were successful or important in their own time and might interest contemporary readers. One of these notable books, reclaimed by Oxford in Asia Paperbacks, was The Head-Hunters of Borneo, by the Norwegian naturalist Carl Bock.

Writing more than a century ago—the book was first published in 1881—Bock recounts his trip through the interior of the country. Commissioned by the Dutch colonialist government to study fauna and gather information about the natives, he visited regions previously unexplored by Europeans and areas inhabited by the Dayaks, “perfect savages and inveterate Head-Hunters.” It was a strenuous journey and, potentially, a dangerous one. With journalistic flair, Bock turned difficulties and dangers to good account in creating a lively travelogue. His book sold so well that it required a second edition by 1882.

As R.H.W. Reece points out in his introduction, the book’s popularity was due in part to Bock's propensity for the exotic and sensational. Bock dwells with intensity on his brief visit with the secretive Punan (Forest People); on his meeting with the chief of the Tring Dayaks, reputed to be cannibals; on his search for the legendary “orang buntut”—“tailed people”—whom he appears to have really believed might be the “missing link”; and, of course, on the head-hunting practices of the Dayaks.

In fact, Bock witnessed neither cannibalism nor head-hunting (nor, needless to say, tailed people); and his ethnographical information—obtained through interpreters, and often based on hearsay—was of questionable value.

But the book’s success rested as well on the quality of Bock’s travel writing. A talented artist—as is evident from his drawings, reproduced here in 30 color plates—he could translate visual perceptions vividly into words, whether describing the jungle, native villages, or the natives themselves—their physical appearance, expressions and gestures.

The Head-Hunters of Borneo—and the shorter Journeyings in Sumatra, also included in the book—show Bock an interested traveler and an affable guide. To be sure, the reader must endure the author’s bigotries and pro-colonialist sentiments; but in a sense these are part of the record. Bock was not without appreciation for native customs. The good humor—and the humor—which saw him through his rugged journey and apparently created good-will with Malays and Dayaks infuse his book with an amiable spirit.