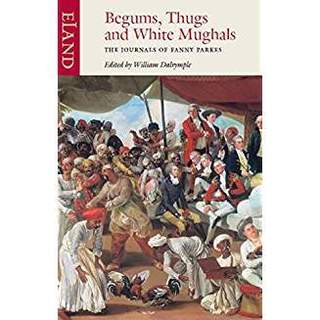 Begums, Thugs and White Mughals: The Journals of Fanny Parkes.
By Fanny Parkes. Edited by William Dalrymple. Originally published in 1850 as Wanderings of a Pilgrim in Search of the Picturesque. Eland Books, 2002, 392pp.

“Can you imagine anything so detestable?” writes Fanny Parkes in an 1835 journal entry about the behavior of Europeans at the sacred Taj Mahal. “European ladies and gentlemen have the band to play on the marble terrace, and dance quadrilles in front of the tomb!” Earlier on her pilgrimage to the Taj, she remarks: “A place is spoiled by European residence.”

These are not the attitudes we expect from a memsahib of the British Raj. But Fanny Parkes defied most stereotypes, which is one of the reasons her journals are so remarkable.

Parkes, the wife of a junior official in Allahabad, arrived in India in 1822 and fell in love with the country from the start. Over the 24 years she lived there, her interest in the people and cultures deepened. She learned Hindustani. She studied the sitar. Interested in everything, especially the zenanas (female apartments), she traveled and described places and customs in lively detail. She collected scorpions, snakes, the skulls of alligators, crocodiles, and hyenas for her cabinet of curiosities. She also collected Persian and Hindustani proverbs, which open chapters and appear throughout the book.

“I study the customs and superstitions of the Hindus so eagerly,” she writes, “that my friends laugh and say, ‘We expect some day to see you at pooja in the river!’”

As William Dalrymple observes in his extremely informative introduction, Parkes was criticized by her contemporaries for “going native.” Although in the mid-18th century, the English appreciated and respected Indian culture and not only intermingled but also intermarried with the Indians, by the time Parkes arrived, attitudes were shifting. By the mid-19th century, the British held themselves apart. Parkes belonged to the older tradition, epitomized by her “beloved friend” Col. Gardner and his extensive multicultural family.

First published in 1850 as Wanderings of a Pilgrim in Search of the Picturesque, Parkes’s journals never appeared in a second edition. Writing in the Guardian in 2007, Dalrymple explains that he was given a copy of the work by an elderly friend, the wife of a cavalry officer in India, whose own life had been influenced by this independent spirit. Whittling the work down from its original 800-plus pages, he has seen the work back into print, giving us a distinctly different perspective on the Raj through the story of an exceptional woman’s cross-cultural journey.