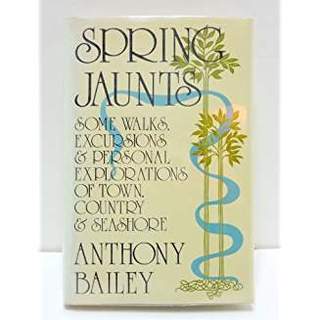 Spring Jaunts recounts five excursions, which did not all actually occur in spring but were impelled, says Bailey, by “spring feelings.” Of the five essays—all originally published in the New Yorker—the three more substantial ones take us to the Isle of Wight, where his father was born; along the Boyne river with poet Seamus Heaney; and to Shropshire, where he travels down the Severn in a small traditional craft called a coracle and visits with Eustace Rogers, perhaps the last coracle-maker in England. In two slighter pieces, Bailey goes to Nice on a sort of second honeymoon, and hikes New Hampshire's 18-mile coastline (“the shortest coastline of any state touching salt water”).

In a sense, all these essays are about time as much as place, or more specifically, about places in time. Filled with historical background as well as close observation, they explore past and present, and the difference between the two. Through his colorful portrait of the Rogers family, for example—Eustace, his father, and his grandfather—Bailey discusses not only coracles but a rural way of life and its passing.

Similarly, in “Irish Miles,” my favorite of the essays, Bailey uses the trek along the Boyne—where he and Heaney beat back briars, stop at inns, observe inhabitants, recite poetry—as a way to talk about Ireland. Inspiring the essay is the Boyne itself, a river laden with religious, mythological, and historical connotations. And there is also the wry presence of Heaney, who is along mainly to shed a few pounds and is not much of a hiker. “Are you going fishing?” asks a local man. “No,” says Heaney. “We're tormenting ourselves by walking.”

As in his other books, Bailey is a perceptive guide, a personable companion, a witty and polished writer. At times, he offers more details than a subject seems to need. Partly because of this, and partly because there are no compelling questions urging us on, these essays can be slow. At times I wanted a bit more drama.

But a jaunt is not really about drama. By definition, a jaunt is “an excursion undertaken for pleasure,” and Bailey’s fit the definition well. Here and there we find a tinge of melancholy perhaps—at the separation of long-married friends, at the hard reality of Parkhurst prison in the midst of the idyllic Isle of Wight, at the persistence of Irish political turmoil. But these essays are not for the dark side. It is in their appreciation of landscapes past and present, man-made and natural that they find their staying power.