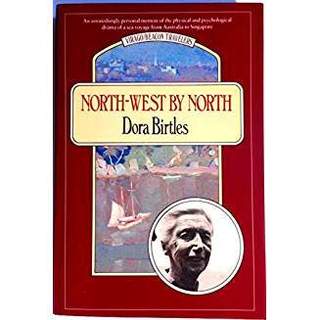 Although it was first published in 1935, Dora Birtles’s North-West by North reads like a more contemporary work. This is mainly because her tale of a voyage from Australia to Singapore gives us the personal story—travel as exploration of self—that nowadays, in a world where so much has already been described, travel narratives are expected to provide.

When the Skaga sailed from Newcastle in 1932, on board with Birtles were her university friends Ruth and Joan, who were cousins; Joan’s husband Henery; and Sven, a Swede, the only professional sailor in the lot and something of an outsider. The idea for the trip was Birtles’s, then in her late 20s and married (though her husband stayed behind) and her aim, she says, was not to be a heroine—though no Australian women had undertaken such a venture before—but a chance for adventure, to see the world cheaply, “to be quite independent, for the first time in my life to be quite responsible for myself.”

Birtles’s chosen route to independence could hardly have been more challenging, amidst a crew closely confined and utterly dependent upon each other. Early on, a huge row erupts, and in the following months, as tensions play themselves out, the voyagers’ interpersonal struggles become the story to which the book’s other stories—of the perils and mishaps of sea life, of characters in ports—for all their energy and color, yield center stage.

Based on diaries written at the time, Birtles’s story is intensely personal, but it manages to transcend the merely personal: here we were, she says, and here are human beings in all their mystery and pettiness as only travel can lay them bare. This broader context is made explicit in a wonderful traveler’s tale told to her by a doctor. As a younger man the doctor, a specialist,

“had set out on a long tramp, weeks in duration, in desert country outback, with one male companion, a person than whom he could not have found anyone more suitable, whose tastes were his tastes, whose brain was brilliant and conversation stimulating and whose acquaintanceship had the interest of novelty, the perfect companion. In a fortnight they had talked each other out and there was nothing more to say. The way grew more monotonous and for three days absolutely deserted as it can be between Adelaide, South Australia, and Bourke, N.S.W. There came a day when the two of them did not speak at all, a long hot day with a dry wind blowing; dust, a day of fatigue and sullen not-thinking when the mind of the Specialist had nothing in it but hatred of the big boots of the man walking on the camel pad ahead of him. That night at the evening meal, still without speaking, they made two camps and two camp-fires and two dampers, within sight of each other but separate, these two friends sleeping apart in the wilderness with a dry dust of hatred in their hearts, a hatred that had arisen as do the willy-willys, the whirlwinds of the western plains, out of nothing, out of the unstirred air of too great a perfection. The next night, fortunately, they fell in with some drovers who built one big campfire and after that they were able to finish the journey, but they never wanted to see each other again.”

Birtles did see some of her companions again, and she provides a brief update on their later lives as well as her own in her introduction, written more than 50 years after the voyage. Writing at 81, she leaves us with a quote from the Australian Prime Minister, John Curtin: “One can forgive, but only a fool forgets.”