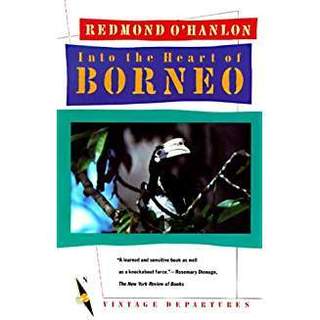 Into the Heart of Borneo
By Redmond O’Hanlon. Vintage Departures, Random House, 1987, 192 pp.

Into the Heart of Borneo fits into a venerable tradition in travel literature: the narrative written by a traveler who is happy to mock his fears, his near-disasters, and his general lack of suitable skills for his journey. An adventure cast partly as farce, the book is also an appreciation of a place, its wildlife, and its people, and it is thoroughly entertaining throughout.

In 1983, Redmond O’Hanlon, a naturalist, book reviewer, and former academic, set off for the center of Borneo with four companions: his friend, James Fenton, a poet and former war correspondent, and three Iban guides—Dana, a chief, and two young men, Leon and Inghai—who fortunately possess the jungle savvy the Brits lack. The goal of the journey was to reach the headwaters of the Baleh, climb Mt. Tiban, and rediscover the Borneo rhinoceros.

The five men head up the river in a canoe with an outboard motor, the Iban navigating and poling, Fenton reading the poetry of Swift, and O’Hanlon describing the landscape, citing wonderful passages from such naturalists as Alfred Russel Wallace, and frequently consulting Smythies’s The Birds of Borneo, which he has brought with him.

O’Hanlon draws humor from small miseries, fears, and embarrassments: aggressive ants, his awful nightmares, the possibility of meeting up with a venomous snake (Borneo, apparently, has the “richest snake fauna of Southeast Asia”), and their wretched diet of sebarau, a bony fish that he compares to “a hairbrush caked in Lard.” In one scene, he and Fenton fail miserably to manage the elaborate fishing gear they have brought, while their guides look on and roar with laughter. In another, while joining in a village entertainment, O’Hanlon so botches his performance that the whole village roars with laughter.

But not everything is comical. We realize the actual danger of the journey when Fenton falls overboard while they are maneuvering some particularly treacherous rapids and is saved, with great effort, by Leon. And we see the reality of lives when the travelers are asked to help a woman who is clearly dying, and they realize there is really nothing they can do.

When the group does reach the headwaters of the Baleh, the chief is very happy, Leon tells O’Hanlon; he is also apparently surprised. “He think we never reach this far place,” says Leon. “Very far.” “Why not?” asks O’Hanlon. “Because of the rapids?” “No, my best friend,” laughs Leon. “Because Jams so old and you so fats.”

Leon, who is smart, funny, and a lady charmer, is a wonderful character. Indeed, one of the best aspects of the book is the depiction of these five personalities, each being entirely himself and yet meshing comfortably with the others as the group makes its way through the jungle on an improbable and delightful journey.