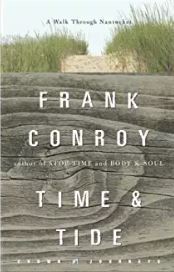 "Nantucket is drenched with memories of the whaling days and the nineteenth century,” writes Frank Conroy in Time & Tide, an entry in the Crown Journeys series which takes readers on brief “walks” through various places. Having lived in Nantucket either as a year-rounder or summer resident since the '50s, Conroy knows the island well and proves an engaging guide to its geography, culture and evolution from the 19th century to the 21st.

As a whaling town, Nantucket was wealthy in the old days: “the rich,” says Conroy “were truly, mind-bogglingly rich.” After the end of the whaling era, the town was left with sheep herding and cranberries. Today, the rich in Nantucket are mind-bogglingly rich again, but when Conroy arrived in the ‘50s, before the biggest changes came, Nantucket, he says, was a “real town,” with a “small-town ‘feel,’” “a relaxed oasis in the ocean.”

Conroy evokes the unique geography and landscape of Nantucket: its distinctive harbor, its exposure to the ocean, its dunes, salt marshes, and moors (around one-third of all moors in America), its brutal winters, and its “delicate wilderness,” which he says, some people “misperceive as bleakness.”

Through anecdotes, about himself and others, Conroy conveys a sense of an older Nantucket and how he found his place in what he describes as a somewhat oddball community. Struggling at first to live on a literary writer’s income, he played piano at a hotel, tried scallop fishing, and collected unemployment checks (along with “half the working people of the island”). In the 70s, he and two partners (one with money) started The Roadhouse, a club with music, booze, and simple, good food—not a financial success for its naïve founders, but extremely popular.

Nantucket has changed, sadly, and Conroy records the impact that development, tourism, and the onslaught of money has had on the island. At one time, he played golf on a beautiful 9-hole course, “high on the island with views of the sea,” for a dollar a hole. In recent times, just a half mile away, an 18-hole course has been constructed by a club that costs $300,000 to join. Indeed, the author’s earliest childhood memory involves watching boys diving for coins at Steamboat Wharf in Nantucket. More recently, his daughter-in-law, wading on the beach, found 2 one-hundred-dollar bills floating in the water.

Conroy, who died in 2005, was for many years director of the Iowa Writers’ Workshop and he is a fine writer. Time & Tide captures Nantucket as a place, though brief as the book is, it felt padded. Reading it, I wanted to visit the island again for its natural beauty. But to stay there, I’d want it to be as it once was.