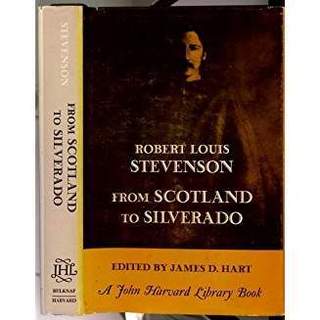 From Scotland to Silverado

In 1879, Robert Louis Stevenson left his native Scotland on a journey to California to meet up with Fanny Van de Grift Osbourne, a married woman whom he had met and fallen in love with several years before, and whom he would eventually marry. In The Amateur Emigrant, he describes his three-week journey, by boat to New York and by emigrant train to Monterey, an arduous trip that left him seriously ill.

At the time, observes James D. Hart in his informative introduction to this volume, the two most important works Stevenson had written were An Inland Voyage and Travels with a Donkey in the Cevennes. Both of these were “records of pleasure trips, undertaken in part simply to provide material for books,” and they were known for their charm.

The Amateur Emigrant is an altogether different kind of work. Stevenson wanted to write about the realities of emigration. Living conditions on both the ship and the train were squalid, the food was poor, the sleeping arrangements wretched, and he wrote about all of this vividly. Too vividly, apparently, for the author’s family and friends, who objected to the image of Stevenson that emerged from the book. Subsequently censored, pruned, withdrawn from publication by his father, the full text appeared for the first time in this 1966 edition, with the deleted portions finally restored.

From the first, Stevenson was interested in the nature of emigration, which he came to see as grim. “There is nothing more agreeable to picture and nothing more pathetic to behold,” he writes. The word may conjure up for us an image of someone setting out boldly to make his way in a new place. But in truth, as he saw, people do not emigrate if they have been successful.

“We were a company of the rejected,” he says. “The drunken, the incompetent, the weak, the prodigal, all who had been unable to prevail against circumstances in the one land, were now fleeing pitifully to another; and though one or two might still succeed, all had already failed.”

Nonetheless, he found the atmosphere on board ship, despite the vile conditions in steerage and his own second cabin, cheerful. He conveys this in deftly written scenes of conversation and singing and in his portraits of his shipmates, which are at once generous and astute. The transfer in New York from ship to train—one of the book's most gripping scenes, which he calls and depicts as a nightmare—leads to the work’s second section, “Across the Plains.” Here he concentrates less on portraits of individual companions and more on the particulars of train travel—the board beds, the locals selling food at the stations—and his reactions to the American landscape and American manners, both so different from those of his homeland.

Stevenson has so many interesting things to say, and he says them so well, that I found myself immersed in his journey day by day. In contrast with travels concocted to generate a lively tale, this is a journey enlivened by the author’s observations and reflections which stimulate our own ruminations about the nature of travel, people, and life.