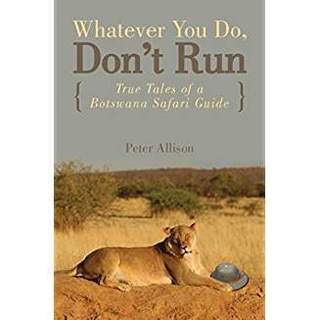 The contemporary African safari is a fascinating mix of the natural and the artificial, the wild and the touristic. Peter Allison captures these contradictions in Whatever You Do, Don’t Run, the first of several books he has written about his adventures as a safari guide.

Allison would not have seemed a likely candidate for a guide when he arrived in Africa from Sydney, Australia, at the age of 19. He was not especially athletic—indeed, he describes himself as uncoordinated. He didn’t know how to drive. But he fell in love with the animals and the land, and undertook the serious training necessary, learning about the wildlife, the plants, the insects, and the terrain.

He shares this knowledge throughout the book, as he takes readers on various expeditions, with tourists, with other guides, or alone. He is an affable companion, self-deprecating, observant, and funny, and though he is not a great stylist, his writing is lively. He vividly depicts getting entangled with a python, witnessing the birth of a baby elephant, and watching lions engage in a territorial chase.

Beyond the wildlife we expect, the big cats and rhinos and elephants, Allison tells about more unusual encounters—as when the camp is overrun by a plague of mice. And though, as he says, “Most people came to see animals that could kill them but hopefully wouldn’t,” the birds of the Okavango Delta are so spectacular that, despite a teenage bias against bird-watching as totally uncool, he gradually finds himself studying bird books, and even putting ticks next to the species he has seen.

Allison is remarkably honest about some of the mistakes he has made—like positioning himself between a lioness and her cubs, or miscalculating the depth of water and drowning his land rover. He is also honest about the tourists, who can be trying: unrealistic in their expectations, unappreciative of what they are seeing, and oblivious to the dangers of the bush. As Allison makes clear, the safari may be a tour, but Africa is not a theme park: the animals are wild and unpredictable, which is precisely what makes the adventure so exciting.