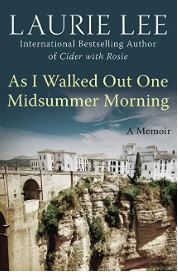 As you would expect of an English youth, Lee heads for London, though his main destination is Southampton, to see the sea. But after working at a buildings job for a year, his journey takes him to Spain, where he trudges through hot fields, wanders into strange villages, takes in cities—Madrid, Toledo, Seville—and at last, wintering in tiny Castillo, finds himself amidst the beginnings of the Spanish civil war.

For Lee, all of this starts out as a youthful adventure, free of obligations. “There was really no hurry,” he says. “I was going nowhere. Nowhere at all but here…Never in my life had I felt so fat with time, so free of the need to be moving or doing.”
But everywhere, he observes the poverty, the inequality, the squalor forced upon the Spaniards, who take care of him with warmth and generosity. Although it is only when he returns to England that he comes to see what the battle he had accidentally happened upon was about, it is this awakening he experiences while traveling that draws him back to fight for the Spanish people’s cause.

This is an exquisitely written book. As I’ve noted in past reviews, I often find imagistic description off-putting: overdone, as it too frequently is, such writing seems to draw attention to the author’s skill with words rather than to what is being described. Not here. The images are so precise, so fitting, that they bring scenes and people to life, and they are also delightful in themselves. Experienced in the 1930s, published in 1969, As I Went Out One Midsummer Morning remains fully alive today.