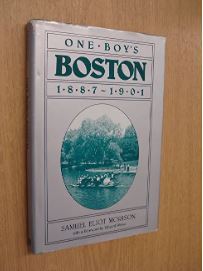 This charming book about a charmed boyhood provides an occasion for time travel. In 81 pages filled with historical detail, anecdotes, even limericks, the historian Samuel Eliot Morison takes us back to a Boston where horses, not cars, rode the streets, where houses were lighted by gas, not electricity, and where—hard to imagine in our own time—telephones were rare.

Morison, the author of more than 25 books—including The Maritime History of Massachusetts and Admiral of the Ocean Sea, a recreation of Columbus’s voyages—paints a portrait of the city as well as one of his own childhood, and he finds delight in both. As a boy, he loved the horses, the colorful trolleys, the winter sledding, and his rambles downtown with friends. He also takes great pleasure in depicting the eccentricities of the adults who surrounded him.

One of the most appealing characters in the book is his grandfather, Samuel Eliot, who was ousted as Superintendent of Schools for Boston, for publishing “a very bowdlerized edition of The Arabian Nights for school use.” He seems to have accepted this and other career setbacks with philosophical humor, “an attitude,” says Morison, “doubtless made easier because his wife had brought enough money into the family for them to live comfortably without the aid of a salary.”

Morison’s family was both well-to-do and well-connected. This was the gay nineties, even in proper Boston, and he describes the parties, the sumptuous 8-course meals, the clubs, and the social visits. He argues strongly against the stereotypical image of Boston society as “stuffy, provincial, purse-proud, prejudiced, and one hundred per cent Republican,” a profile that he attributes to “gossip columnists and novelists masquerading as social historians.”

It’s true that his family appears to have been liberal, that not all of his friends were wealthy, and that the working class people he encountered daily are described, and seem to have been treated, with affection and respect. Morison’s own father ran for City Council as a Democrat.

But he sounds naïve when he says that “within the Boston society in which I grew up there were no distinctions of wealth.” On the very next page, describing how newcomers were readily accepted, he observes: “The way to get in was to buy a town house on Commonwealth Avenue or Beacon Street, and a place on the North Shore, and send your children to private schools in the Back Bay.” Something tells me the poor need not apply!

One of the pleasures of this book is Morison’s prose, which is concise yet rich, and lifted throughout by dry wit. I can see why he enjoyed his childhood—I enjoyed it as well. But as for Boston, as much as I love Cambridge, where I live, I'm afraid I remain with the satirist he quotes:

Ah yes, to be born in Boston, introduced by a spectacled stork;
In our great social spawn ‘tis the place to be born—
But, ye gods, let me live in New York!