An Appetite for Paris 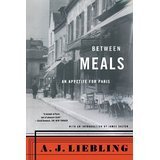 Between Meals: An Appetite for Paris
By A. J. Liebling. With an introduction by James Salter. North Point Press, 1986. (Parts originally published earlier in New Yorker.) 167 pp.

“The eater’s apprenticeship, though less arduous, must be as earnest as the cook’s,” writes A. J. Liebling in Between Meals, eight essays that explore his education in the art of eating. This course of study took place of course in France (“It goes without saying that it is essential to be in France.”) beginning in 1926, when, at the age of 22, he spent a year in Paris, technically registered at the Sorbonne but in fact haunting the city’s restaurants, cafes, and bars, acquiring expertise in the subject that would engross him for the rest of his life.

That year, so central to Liebling’s life, is at the heart of these essays, many previously published in the New Yorker, where he was a staff writer.


Writing about his mentor, Yves Mirande, a playwright and “one of the last of the great around-the-clock gastronomes of France,” about restaurant owners, about a girlfriend, about a rowing club where he rowed little but dined well, and above all about the great meals and wines he enjoyed, he takes us back to a Paris long gone. This was a world before plane travel was popular, before automobiles were common, before healthy diets were on everyone’s mind and thin was worshiped, and especially of course before WWII.

On the first of his returns to Paris, in 1939, Liebling already sees a decline in restaurant cuisine, but he now realizes that that decline had already been underway in the 20s. “What I had taken for a Golden Age was in fact Late Silver,” he says, looking back to the era before the First World War, when the courtesans were zaftig, the successful Frenchman was fat, and, as Mirande says, “feasts followed upon feasts.”

James Salter was an appropriate choice to write the introduction to these engaging, precisely written essays: he loved Paris, wrote about travel and food, admired Liebling, and shared his masculine perspective. But while his introduction is informative, it casts a shadow on the book that follows. Here we learn that Liebling was “legendary as a glutton” and that “in the end he destroyed himself through gluttony with kidney and heart trouble and his fingers, toes, and even ears disfigured by gout.” Knowing this made it harder for me to enjoy the sumptuous meals that Liebling writes about with such pleasure. I can’t say that Salter should have censored his introduction, but perhaps it would have served better as an epilogue, allowing readers to savor the food before learning the consequences.