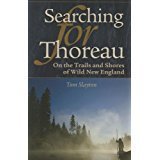 Searching for Thoreau: On the Trails and Shores of Wild New England
By Tom Slayton. Images of the Past, 2007, 208 pp.

Henry David Thoreau is a major American figure today, an object of adoration to his many followers, the subject of numerous books. “Why?” asks Tom Slayton, in Searching for Thoreau. “Why is Henry David Thoreau, who was regarded as—at best—a minor disciple of Emerson while alive, now so vitally important to our contemporary experience? Why is he the only Transcendentalist we still read willingly?”

This is an excellent question and one that Slayton is a good candidate to answer well. Former editor-in-chief of Vermont Life, he has long been drawn to the Concord author, and he knows the New England landscape well, as a hiker and climber. In his quest to understand Thoreau, he decided to travel to the places the author visited and wrote about. Focusing each chapter/essay on a particular place—Walden (of course) and the Maine woods, Mt. Washington and Cape Cod—he follows Thoreau’s trails, cites his writings, and provides historic background. He also recounts his own adventures on these trips, and compares today’s landscapes to those of the past.

Slayton introduces us early on to the cantankerous, stubborn philosopher, who failed early in his endeavors; berated his Concord neighbors—for their “cowardice, subservience, and conformity”; mourned the loss of his brother; and found his way to an intense relationship with nature, wilderness, and the wild.

One of the most striking chapters describes Thoreau’s struggle to climb the notoriously difficult Mt. Katahdin in 1846. He never did reach the summit, and seems to have returned a changed man. “Perhaps I most fully realized that this was primeval, untamed, and forever untameable Nature,” he wrote. Slayton believes that Thoreau, confronting the savagery of the mountain, became less the Romantic, basing his writing thereafter more fully on “observable facts.”

Also striking is the essay on Cape Cod. Anyone who has visited the Cape today, so filled with tourists, will find it hard to grasp that Thoreau and his friend Ellery Channing were probably the first in the area, and that “travelers there were so unusual in 1849 that people thought the two might be bank robbers.” It’s equally surprising to learn that the Cape, whose challenge today is overdevelopment, was a barren place at the time, ruined by deforestation, overgrazing, and erosion.

Although Slayton admires and feels affection for Thoreau, he doesn’t gloss over the man’s flaws. He addresses honestly the preachiness, the stubbornness, and the superciliousness toward his neighbors that earned him their animosity. He has only modest praise for A Week on the Concord and Merrimack Rivers, which he says, despite some “luminous” passages, is “ a tendentious, episodic, fragmented book.” And he offers interesting commentary on Walden, “a truly strange great book,” he says, that opens with preachiness and sarcasm but gradually grows more nuanced, “subtler and more graceful,” documenting the author’s own growth during his years at the pond.

By the end of the book, Slayton has made it clear why Thoreau has earned respect and admiration—from environmentalists like John Muir and Bill McKibben, who have been inspired by his relation to the natural world, from protest leaders like Gandhi and Martin Luther King, who have been inspired by his essay “Civil Disobedience,” from all of us for whom his causes, unusual in his own day, are now central. Thoreau foresaw the dangers of commercialism, stood his ground for his principles, and, as Slayton observes, he was a terrific writer.