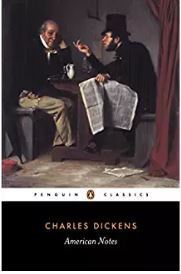 Travel by coach, railway, and steamboat was strenuous, but he makes good fun of the discomforts—the bad food, the atrocious sleeping accommodations. He cannot find humor, though, in the filth, especially the omnipresent tobacco spitting, which disgusted him. I would have liked to hear from Mrs. Dickens about these ordeals, but though she accompanied him, she remains voiceless throughout.

This is very much a Dickensian tour: he visits public institutions—prisons, insane asylums, the Perkins Institution and Massachusetts Asylum for the Blind (which he cannot praise highly enough)—and comments always on the poor, the needy, and the obligations of government to assist them. And Dickens being Dickens, he finds stories everywhere—recording in detail the story of Laura Bridgman, a girl left blind and deaf and even without a sense of smell by childhood fever, who is educated at the Perkins School, or imagining the thoughts of the prisoners in Philadelphia’s punishing system of Solitary Confinement. His remarks are wide-ranging and frank: he mocks the Shakers, loathes the Mississippi River, admires a Choctaw Chief.

Initially Dickens had planned to travel further south but decided against it, partly because of time and the heat, but largely because of his aversion to slavery. The ugliness of slavery is a theme running through the book, and through his eyes we see its centrality to any view of American life. Indeed, he devotes a chapter to “that most hideous blot and foul disgrace,” delivering a powerful polemic that includes a list of newspaper ads for runaway slaves, which identify them by their irons and mutilations. The descriptions are repellent, so painful they are almost unreadable, and the chapter is deeply affecting.

Although Dickens saves his generalizations about the American character for a concluding chapter, he has of course shaped his stories and commentary throughout to express his praise or criticism. The targets of praise are very much what you would expect—Americans’ frankness, their enthusiasm, the institutions that are trying to do good work.

But it is Dickens’s criticism of what he found in 1842 that seems to me extremely pertinent today. Most notably, he sees a system that deters the best men from running for public office; an acceptance of violence that permits people to shoot each other without punishment; an abject and licentious press; and a “love of ‘smart dealing,’” an admiration that “enables many a knave to hold his head up with the best, who well deserves a halter.” The art of the deal was apparently worshipped in America a long time ago.

In a postscript, Dickens writes of his later visit to America in 1868, and the great advancement he found everywhere. But reading his earlier remarks, I find myself reflecting on the character of our country and whether we will ever successfully uproot our weakness for violence, craven politicians, and vendors selling snake oil as balm.