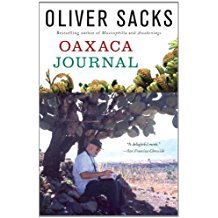 It’s hardly surprising that Oliver Sacks kept journals on his journeys. How else would he keep track of his many observations, clarify his many thoughts, or create his many stories? Oaxaca Journal is the diary (somewhat embellished) of the 9-day fern-tour he took with the American Fern Society to Oaxaca, Mexico, in 2000.

Although the tour was organized by professional botanists, many members of the group, as in the American Fern Society itself, were amateurs, and this was the draw for Sacks, who had great admiration for amateur naturalists (or birdwatchers, or astronomers, or archaeologists)—their passion, their erudition, the fact that they are inspired by a “sense of adventure and wonder rather than by egotism and a lust for priority and fame.” Though not himself a fern expert, throughout the book he expresses his respect for the botanists he is with, and though generally a “singleton,” he says, he finds real joy here in becoming “one of a group.”

Much of Oaxaca Journal is, of course, about ferns, for which the region is a paradise. There are more than 5500 species of ferns in Oaxaca, compared to around 400 in all of North America, and they are fascinating in their habits and variety. Even though I have a fern garden that I enjoy, there was admittedly a bit more about ferns here than I needed to know—and perhaps even more than Sacks needed to know, since at one point, when the group enthusiastically encounters the rare Llavea cordifolia, he remarks, “Just another damn fern.”

Yet because these ferns are described through the excitement of being found, they become exciting themselves. And it’s fun to observe these mostly elderly botanists scrabbling and scrambling around—in one case, someone risking his life—to examine some treasure.

Beyond ferns, though, there is Oliver Sacks, whose notable curiosity leads to unpredictable digressions. We learn about the hallucinogenic properties of morning glory seeds, which, back in the '60s, Sacks himself used to pound and mix with vanilla ice cream for their LSD effect. We learn that the Mayan word for smoking is sik’ar. And who would have guessed that grasshoppers were kosher?

Sacks comments on the filth and poverty of the city—Oaxaca is not just a botanist’s Eden—and when he visits the ruins at Monte Alban, he reflects on the complex societies and cultures of Mesoamerica and the tragedy of the Spanish conquest. But for a deep exploration of these issues, one would look elsewhere. Oaxaca Journal is, as the author says of all his journals, “light, fragmentary, impressionistic, and above all, personal”: an engaging account of a trip, a paean to amateur naturalists, and a chance to listen to the ever-interested and interesting Oliver Sacks.