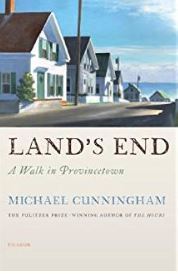 Provincetown, situated at the tip of Cape Cod, is “the lands’ end; it is not en route to anywhere else,” says Michael Cunningham in his guide to the town. “One of its charms is the fact that those who go there have made some effort to do so.”

Many people do make that effort. Every summer, thousands of tourists swarm this beach town. Commercial Street, lined with shops and with some of the more flamboyantly costumed members of the large gay community, takes on a carnival atmosphere.

Cunningham takes readers beyond the honky-tonk to explore the character of the place. Like Frank Conroy’s Time & Tide, which I reviewed earlier this month, Land’s End is an entry in Crown Journeys’ series of “walks,” and it similarly offers a mix of historical and geographical information, personal anecdotes, and practical guidance for visitors.

Provincetown—or P-town, as it is known—has a long history; it was incorporated in 1720. In fact, Cunningham notes, it was the place where the Pilgrims first settled before moving on to Plymouth for lack of fresh water. A whaling town till the demise of the whaling industry in the mid-1800s, it then became a fishing village. But by 1873, the author says, it was emerging as an artists’ colony, home in its early 20th century heyday to a variety of artists and writers—most famously, Eugene O’Neill.

In recent years, after an effort to revive the town as an artists’ colony, it began once again to attract artists and writers—among them, Cunningham, who arrived in Provincetown more than 20 years ago on a fellowship from the Fine Arts Work Center.

He struggled the first winter—he had trouble writing and winters are cold and lonely in Provincetown—but he came to love the place. He loves the landscape, with its defining sand, its magnificent light, and its quiet, haunting spaces. He loves the eclectic population, whose quirkiness he describes with affection. And he loves the town’s unconventionality, its openness about gay sex, its willingness to welcome newcomers and give them permission to live their own lives.

“Provincetown is, has always been, an eccentric’s sanctuary,” he writes. “Bad behavior is frowned upon; unorthodoxy is not.”

Cunningham’s walks, with directions, take readers to various beaches, gay and straight, to wilderness spots and night spots, to notable houses. Along the way he comments on people he knows, has loved, has lost through the AIDS epidemic, which hit Provincetown hard. Throughout he returns again and again to the beauty of the place.

By the end, Cunningham has brought this colorful town to life. It feels like a human presence, warts and all. After reading Land’s End, I reflected that if I returned to P-town, I would avoid Commercial Street and the popular beaches altogether. I would seek out those quiet, haunting places Cunningham so vividly evokes that I—like many other visitors, I imagine—missed.