Review: Off The Leash: Subversive Journeys Around Vermont 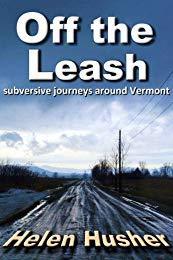 Off the Leash: Subversive Journeys Around Vermont
By Helen Husher. Countryman Press, 1999, 206 pp.

The title of this book suggests that we may be in for some wild rides, but this is misleading. In twelve essays, Helen Husher gives us an untouristic (though not especially subversive) tour of her home state of Vermont. The metaphorical dog off the leash here isn’t snarling or on the attack: she’s quietly wandering, exploring, digging up the forgotten stories of places that are too often passed by.

Interweaving personal narrative and contextual information, Husher takes us on some surprising jaunts—to the Joseph Smith Memorial, for example, where the author climbs to an extraordinary view and reflects on the Mormons’ westward expansion, reminding us that both Smith and Brigham Young were actually born in Vermont. Or to the site of the Fenian Raids of 1866 and 1870, where a group of Irish American soldiers decided to cross the border and establish a “free Irish Republic in Canada”—an event that the Americans may have forgotten but, Husher observes, the Canadians have not.

Husher has a good eye for interesting stories. In “Indian Stones: The Captivity of Susanna Johnson,” she focuses on the 1799 markers that commemorate the abduction in 1754 of Johnson and her family by Native Americans and the birth of her daughter. The images on these stones “tell some kind of story,” says Husher, “if we can only work out what it is.” Why an image of a coffin, for instance, when the baby lived? The glyphs are fascinating, as is the fate of the family itself, whose complex story she briefly recounts.

The essay I most enjoyed was “Tales from the Crytozoologists: The Monster in the Lake,” a comment on Loch Ness-type monsters in general and on one in particular: Champ, who is rumored to inhabit Lake Champlain. The nature of the multiple sightings, Husher suggests, illustrates that Champ isn’t really a monster. “Unlike other water beasts, he does not capsize boats, eat livestock or humans, or engage in unprovoked assaults on solitary fishermen. That would be a breach of Vermont manners—here the integrity of individuals is prized above all other things, making the state a natural and comfortable home for artists, grumps, and oddities.” Localities, suggests the author, imagine into being the creatures they want and need.

This emphasis on the richness of local surroundings frames Off the Leash. Not all of the essays sustained my interest—some, I thought, felt strained—but in the best, Husher writes persuasively about the “unexpected, resonant, talkative” places that we can find close to home, wherever home might be.