Review: An Area of Darkness 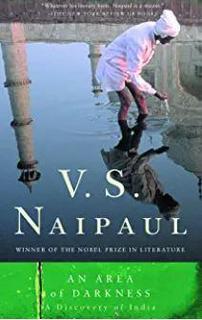 An Area of Darkness

Although V. S. Naipaul was born in Trinidad, his family originally came from India, and in the early '60s, the author made his first journey to the subcontinent.  An Area of Darkness chronicles this year of travel, which took him to Bombay, Delhi, Kashmir, and eventually to the small village that his grandfather left as an indentured laborer more than 60 years before.

As Naipaul travels, the finely wrought sentences and observations about caste and the Raj can give his account an aura of reason and even detachment.  But this is deceptive.  The level of hostility toward almost everything observed, the ugly disparagement of the country and its inhabitants, the simmering anger always ready to burst forth—all make it clear that for Naipaul this is a deeply emotional journey.

Naipaul is understandably appalled by the poverty, the dirt, the subservience that he observes.  "The beggars, the gutters, the starved bodies, the weeping swollen-bellied child black with flies in the filth and cowdung and human excrement of a bazaar lane, the dogs, ribby, mangy, cowed and cowardly, reserving their anger, like the human beings around them, for others of their kind."

All around he sees a "static, decayed society" that keeps people down.  He writes astutely about the negative impact of the Raj and of the caste system, which, he says, reduces people to functionality.  People defecate openly because there will be sweepers whose function it is to clean up after them.  There is no bravery, he writes, not because of cowardice but because "bravery, the willingness to risk one's life, is the function of the soldier and no one else."

But the negative is almost all that he sees, and he expresses his revulsion in contemptuous language.  A man is "rat-faced."  The roads are "infested with peasants."  ("Infested!") The railways "reveal India as futility and limitless pain."  India's famous bureaucracy, "the rows of young men sitting at long tables, buried among sheaves of paper"—an image that might evoke a bit of humor—is for Naipaul, he says, "more than I could bear."  His contempt extends to the Indians' use of the English language: he seems unable to consider that what he perceives as "incorrect" usage might be Indian usage, that the Indians have made the language their own.

Reading all of this, I felt compelled to ask:  Why the savage disparagement?  Why the intense disdain?

Repugnant though it is, the text reveals Naipaul to be a vulnerable narrator.  My sense is that in India, he confronts an identity thrust upon him, an identity he neither feels nor wants any part of.  Yes, his heritage is Indian.  But "In Trinidad," he writes, "to be an Indian was to be distinctive…To be an Indian in England was distinctive."  In India, however, "for the first time in my life," he says, "I was one of the crowd."   He can't simply observe the poverty or the bureaucracy with detachment—he sees himself through the eyes of others as part of this inferior, inadequate, filthy society and feels deeply ashamed.  Only when he finds some "privacy and protection,"— "Only then was I released from the delirium of seeing certain aspects of myself magnified out of recognition."

Naipaul's failed visit to his grandfather's village—a trip that ends in "futility and impatience, a gratuitous act of cruelty, self-reproach and flight"—seems to me to exemplify his shame and inability to accept his Indian heritage. The whole journey, he writes, "ought not to have been made; it had broken my life in two."  Newly arrived back in Europe, asked by an Indian friend to write him with "his freshest impressions" of India, Naipaul says, "I forget now what I wrote.  It was violent and incoherent; but, like everything I wrote about India, it exorcized nothing."  India remains for him "an area of darkness."

Ultimately, this is a painful journey for the author, and he doesn't hide the pain.  Indeed, he would be a sympathetic figure, if he were not so arrogant, so bigoted, and so lacking in sympathy--and empathy--himself.