Review: Bones of the Master: A Journey to Secret Mongolia 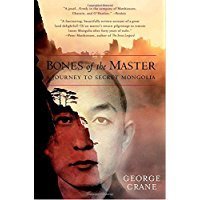 Bones of the Master, an engrossing story of a pilgrimage, revolves around Tsung Tsai, an extraordinary Buddhist monk, who fled Mongolia in 1959, when Chinese communists were destroying monasteries and killing monks. In 1995, now living in upstate New York, he decides he must return to his homeland, find the bones of his teacher, and properly cremate and build a stupa for them in the cave where his teacher lived.

For this journey, he recruits his good friend and neighbor George Crane, who raises the necessary funds for the journey by selling a book proposal, and in 1996, the two set off.

While establishing the background for the journey, Crane introduces us to the two main characters, who form an improbable couple. Tsung Tsai is a true Ch’an monk, dedicated to meditation, solitude, reading, celibacy. Though when the two first meet in Crane’s backyard in 1987, Crane doesn’t know—and wouldn’t guess from the rags that Tsung Tsai is wearing—the man is a Buddhist and Sanskrit scholar, whose paintings are collected in Hong Kong. And as we see throughout the Mongolian journey, he is a well-known and highly respected monk.

Crane, on the other hand, a poet in his 40s, describes himself as “a cerebral ne'er-do-well with a love of books, women, and travel and a distaste for long-term employment.”


To Crane—or “Georgie,” as the older Tsung Tsai like to call him—“duty” and “mission” are “ugly words”; to the monk, they are life-blood. Where Tsung Tsai is utterly sure of his true path, Crane is probing, questioning what is true, and not at all sure what is right for him.

The journey itself is in every sense a challenge. The region where they’re headed is closed to foreigners and, without visas, they fear meeting soldiers. The landscape is bleak, the climate harsh, and the houses where they stay are cold, dirty, and uncomfortable. The steep climb to the teacher’s cave is so arduous that on the descent—in the dark, with the temperature falling—Tsung Tsai, who is 71 and ill, begins falling down and needs to be carried by one of their guides: “Legs completely like noodle,” he says. That he survives seems miraculous. “Buddha’s power,” Tsung Tsai would say.

The journey, the people, whom Crane describes with clarity and respect, and the landscape with its ice and sandstorms are all engaging. But what makes the book so exceptional is the relationship between the two men, which emerges in their evocative, telling, and often hilarious conversations: about Crane’s “black fox problem” (he is filled with desire, says Tsung Tsai; “Woof!” Crane barks); about the three-foot high marble statue of Buddha that Tsung Tsai insists on bringing on the trip (“So much for traveling light and keeping a low profile,” thinks Crane); about thinking and not thinking, questioning and not questioning.

When they meet an old lama who says he knew Crane in another life, Crane eagerly asks, “A previous incarnation? When? Who was I? Does he say?” To which Tsung Tsai replies, “Aii, Georgie, always you are asking foolish questions. Questions of little mind. Like nothing. Like pee-pee. Don’t make confusion.”

For Crane the journey is an adventure rather than a sacred journey. He says that he can’t fathom Tsung Tsai’s “level of devotion.” But devotion—to Tsung Tsai himself—is what I perceived throughout the book, both in his concern and caring for his friend on the journey, and in his portrayal of a humane and truly remarkable man.