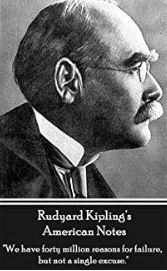 Kipling begins his journey in San Francisco, heads up to the northwest, visits Salt Lake City, Yellowstone, Chicago, Buffalo, and ends up in Niagara, though this last place isn’t described. He finds little that he likes, apart from salmon fishing in Oregon and young women in general. Many of his criticisms seem valid: the American emphasis on money, the boastfulness, even in church, the “grimy reality” of politics, the personal invasiveness of the press, the violence of firearms are all still with us today.

But there’s a lack of counterbalance, and the tone is absurdly supercilious throughout—“super-sarcastic,” as the introduction remarks. Perhaps Kipling intended his narrative to be humorous. But the prose is strained, the observations about people nasty, and I found nothing to laugh about and not a touch of wit.

What truly sinks the book though is the pervasive racism and bigotry, particularly of course against blacks. I don’t think any book should be “suppressed,” but I’d leave this one on the shelf.