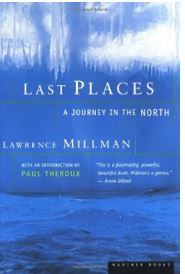 Last Places: A Journey in the North
By Lawrence Millman. Introduction by Paul Theroux. First published in 1990. Houghton Mifflin, 2000, 242 pp.

“In travel, as in food, one man’s caviar is another man’s soggy dumpling,” writes Lawrence Millman, whose own taste for bleak, forsaken places led him to the cold waters of the North Atlantic. The pull, it seems, was magnetic. “Glacially scoured boulders put my feet in an inspirational mood,” he says. “Resolutely barren islands made my soul sing; the more barren, the more rollicking the song.”

Curious to investigate this attraction, Millman set out to travel the entire breadth of the North Atlantic, from Norway to Newfoundland. He would follow the route the Vikings took as they sailed out in search of “space, autonomy, elbowroom,” choosing places that were “unkempt, forbidding, or just plain empty,” “the last places at the very rim of the globe.”

In Last Places, Millman takes us on his four-month journey to the Shetland Islands and the Faeroes, to Iceland, Greenland, and Newfoundland. Avoiding planes and cars as much as possible, he travels mainly by boat or on foot, “as walking makes the world the vast and savory place it used to be in times long past.” Along the way, he delights in the cold, rocky places where he camps and in the slew of eccentrics he meets.

Millman loves stories: the stories that people tell him, the stories that he tells about them, the stories—historical or mythic—that he retrieves from the past. There is the lighthouse keeper who has a library of some 16,000 books. There is the fellow who, in shame because his two boatmates died and he survived, has lived alone in the wild for fifteen years. There is the guide, a mighty hunter of seals, whose boat is well-stocked with potato chips in case they get stuck in the ice, and who shows him how to hunt seals by playing seal, “barking, grunting, bobbing his head, and glancing nervously left and right, turning into one of the most convincing seals I’ve ever seen, except for the John Player’s Special in his right flipper.”

These tales are colorful and surprising, but they reveal little about individuals. As people came and went, I felt that I gained little insight into their lives, and I would have liked a bit more flesh on these profiles. But the stories are certainly entertaining, and they leave a satisfying sense of the quirkiness of people. As the British would say: There’s nowt so queer as folk. And as Millman might add: There’s nowt so queer as folk in this cold Northern realm.

Throughout the book, he conveys a strong sense of the desolate landscapes he loves and never fails to observe. In one wonderful scene, he sees a sea eagle “poised on magisterial wings” above a mountain nearby. “It was a scene of peerless tranquility,” he writes, “tossed out in Nature’s devil-may-care way, which says: Just open your eyes, my friend, and I’ll astonish you every minute of your life.”