Review: White Sands: Experiences from the Outside World 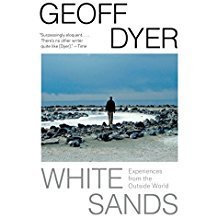 White Sands: Experiences from the Outside World.
By Geoff Dyer. Pantheon Books, 2016, 233 pp.

The stories in White Sands find Geoff Dyer on journeys in various parts of the world: on a book tour in China, researching Gaugin in Tahiti, reflecting on “The Lightning Field” in New Mexico, making a pilgrimage to Theodore Adorno’s house and contemplating the Watts Towers in Los Angeles. Each piece is preceded by a brief prologue relating to the author’s past that provides an associative context for the story that follows.

Dyer doesn’t just travel. He’s a writer who probes the experience of place and of travel itself, looking for meanings. Sometimes he finds them. His essay on the Watts Towers draws on jazz musicians and various writers to create an intriguing portrait of the man who built them, Sabato Rodia, and their import.

On the other hand, his story of seeking out Adorno’s house struck me as mainly pretentious. “I have this need to show off, to show that I know things,” he says, and this piece seemed to me to suffer from that need.

Dyer does know a lot of things: he’s read widely, he’s knowledgeable about art, music, photography. This background leads him to many digressions which can enrich his stories, when the need to show off doesn’t get in the way. I felt the same way about his prose style. He’s a fluent writer, often very funny, and a pleasure to read. But at times his facility leads to misjudgments—as when, writing about Gaugin and Van Gogh, he remarks that “although it took everyone by surprise it was probably no surprise when Van Gogh cut off his ear to spite his face.” I cringed.

In “Space in Time” (about “The Lightning Field” by Walter De Maria) and “Time in Space” (about the “Spiral Jetty” by Robert Smithson), Dyer works hard to deliver some interesting perceptions on Land Art. But two of the essays I most enjoyed were simpler. “Northern Dark,” in which the author and his wife nearly freeze to death in Svalbard hoping to see the Northern Lights, is hilarious.

And “White Sands,” the title story, in which the couple pick up a hitchhiker who may or may not be dangerous, manages to be at once tense, thought-provoking, and funny. Of course, since Dyer says at the start that this book is “a mixture of fiction and non-fiction,” and we don’t know which parts are which, we don’t know what actually happened. Perhaps there wasn’t a hitchhiker at all, or perhaps they didn’t see a sign saying “Detention Facilities in Area,” and Dyer just thought it would make a good tale.

I know this blending of fact and fiction in writing is old hat these days, but it leaves me with reservations. Certainly we all create our own stories out of what we see as having happened; we interpret things individually and differently. But there are nonetheless facts. I can’t help thinking that our dedication to “creative non-fiction,” our willingness in literature to blur factual/fictive boundaries, has led us straight to "alternative facts" and “fake news.”