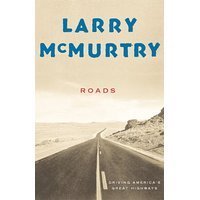 McMurtry is not just a traveler: he has an intense interest in the subject of travel. He owns 3000 travel books,


he says, and he has not only read them but has clearly given them thought. I found his observations astute, whether he was reflecting on solitary travel, on the obsessive nature of the great travelers, or on the significance of place. He argues forcefully against the idea that the proliferation of chain stores has homogenized America:

“In America the light itself will always differ; the winter light on the Sault Ste. Marie, at the head of the 75, will never be like the light over the Everglades, at the bottom of that road. Eastern light is never as strong or as full as western light; a thousand McDonald’s will not make Boston feel like Tucson. Cities and suburbs and freeway exits may collect the ugliness of consumer culture, but place itself cannot be homogenized.”

If I were setting out to drive America, I might turn to this book to see what McMurtry had to say about particular interstates; and I don’t doubt that what he says would reflect the nature of the road. But in this narrative, I’m sorry to say, the highways didn’t come to life for me. Unfamiliar with most of them, I found the route numbers to be just numbers, easily forgotten. Perhaps this is why, somewhat perversely, the chapter I liked best, “Short Roads to a Deep Place,” didn’t involve an interstate at all.

Though brief, this chapter takes us back to the “dirt-road world” of Archer City, Texas, where the author grew up and now lives, evoking the place of his childhood and a sense of his father, “for whom land, grass, and sky composed a great, ever varying text whose interest he could never exhaust.” In Archer City, though there are now “mostly paved” roads that go by the ranch where he grew up, he will “still—unless it’s raining—usually take the dirt road.” Reading this chapter, which came near the end of the book, I felt, as McMurtry himself says, “After so much speeding across the country, once in a while it’s nice to move slow.”