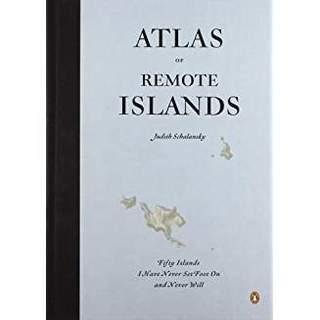 Atlas of Remote Islands: Fifty Islands I Have Never Set Foot On and Never Will.
By Judith Schalansky. Translated from the German by Christine Lo. Penguin, 2009, 143 pp.

Islands occupy a fascinating place in the Western imagination. Conceptually, they exert a strong pull, but they pull in contradictory directions. On the one hand, they offer a dream of freedom, solitude, a perpetual idyll; on the other, a nightmare of imprisonment, isolation, and permanent abandonment. As Judith Schalansky observes in her elegant and original book, “Paradise is an island. So is hell.”

Schalansky’s Atlas of Remote Islands explores the nature of islands by focusing on the extremes: fifty islands that are not only distant from continents but are also sparsely inhabited, or uninhabited, or uninhabitable, and in some cases are nearly inaccessible. Believing that cartography should rank among the arts, and that the atlas should be considered literature, the author brings together, for each island, an exquisite detailed map, set like a jewel in a blue sea, and, just opposite, on a single page of text, an evocative, haunting narrative about the place.

Schalansky takes us to St Kilda, in the Atlantic, where infants, though born healthy, quickly contract a mysterious illness and can’t survive. The island is no longer inhabited. She takes us to Christmas Island, in the Indian Ocean, where every November vast armies of yellow crazy ants attack the 120 million crabs that make their way to the sea.

She takes us to Tromelin, in the Indian Ocean, which became a doomed refuge for shipwrecked slaves; to Pitcairn Island, in the Pacific Ocean, where the descendants of the Bounty mutineers survive; and to Cocos Island, also in the Pacific, where August Gissler spent 16 years digging for buried treasure he never found. “If I were young,” he said, not long before he died in 1935, “I would start again from the beginning.”

For most people, a few of the islands in this atlas will be familiar: Iwo Jima, Easter Island, and Pitcairn Island, infamous for its sexual scandal. Most of the places, though, are obscure, their history buried in the past. Some of Schalansky’s stories seem scarcely credible, and her cryptic style enhances the mystery. But all the tales are based on research: she has not invented them but gleaned them from ancient books. Whether or not they are true, they are the stories of these islands, as much a part of them as their mountains and rivers, their vegetation and wildlife, and their topography, so beautifully depicted in this imaginative book.