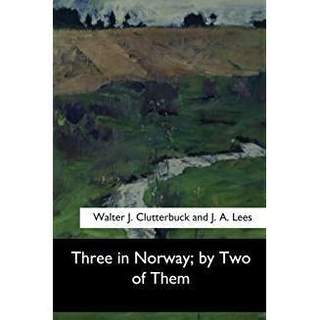 "To travel. An intransitive verb. A state of being, not a journey to a destination."
―Jonathan Raban, Coasting

When my husband picked up Three in Norway by Two of Them at a library sale, drawn to the subject of Norway where he had lived as a child, we knew nothing about the book. Mainly we were surprised at the curious edition, which failed to identify the authors on the cover or even on the title page.

But it turns out the book is a classic.

First published in 1882, it chronicles the summer journey of three young men who set off for the mountains of Norway “in search of trout, reindeer, and the picturesque.” The trio consists of two Englishmen and an Irishman, nicknamed the Skipper, Esau, and John, all endowed with an abundance of self-mocking humor, energy, and appetite. If the book calls to mind Jerome K. Jerome’s Three Men in a Boat (To Say Nothing of the Dog), Three in Norway is in fact the original, published seven years earlier.

The narrative, arranged as a journal, opens in July, as the Skipper and Esau sail from Hull to Christiania, as Oslo was then known. They are laden with supplies that include two canoes, and their plan is to fish their way through the Norwegian lakes to the Jotunheimen, the highest mountain range in Northern Europe, and set up camp as reindeer season begins. John, leaving later, will meet them.

Writing as “we,” the narrators record with wry humor their adventures and misadventures, transforming all into entertaining tales about fishing, hiking, dealing with the vagaries of climate or the nocturnal consequences of the too-heavy bread they have baked.

Charming sketches, drawn by the authors, accompany the text, depicting landscape, animals, and themselves. My favorite is a drawing of Esau doing battle with one of the mosquitoes that plague them early in their journey. Esau wields a club while the mosquito, as big as he is, points a huge proboscis at his neck.

The mountains of Norway must have seemed a wild travel adventure in 1882, and the three men met few people in this underpopulated region—a few natives staying in summer homes, called saeters, a few locals, a few travelers who could stay at huts where caretakers housed and fed them. Nowadays the Norwegians have established a series of such huts along the trails of the Jotunheimen, providing hikers with daily lodgings. When my husband and I hiked there in the sixties, we found the beauty of the place as unspoiled as this book describes it.

Readers sensitive to hunting or fishing should be warned: animals were harmed in the making of this book. Deer are stalked and vast quantities of trout are consumed. But that after all was at least part of the journey’s aim. I might also mention that the depiction of the Norwegians, especially the “simple” locals, is stereotyped, as is so typical of earlier travel narratives.

But the Norwegians haven’t seemed to mind. According to fly-fishing expert Jon Beer, who retraced the trio’s journey and wrote an introduction to a new edition of Three in Norway in 2003, the book has remained popular in Norway, and its authors “revered as important figures in the history of Norwegian mountain sports.” In fact, he notes, the Norwegian Mountain Museum in Lom dedicates an exhibit to the journey, and has the tent in which the Skipper, Esau, and John camped.