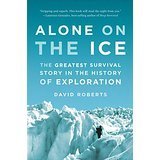 “Polar exploration is at once the cleanest and most isolated way of having a bad time which has been devised.”
― Apsley Cherry-Garrard, The Worst Journey in the World

Alone on the Ice: The Greatest Survival Story in the History of Exploration
By David Roberts. W.W. Norton, 2013, 368 pp.

Ever since I first read about Douglas Mawson in Lennard Bickel’s Mawson’s Will, I’ve wondered why this great Australian Antarctic explorer is so little known in this country, even by polar exploration fans. While Amundsen, Scott, and Shackleton have had fame and cultish followings, Mawson’s name, I find, tends to draw a blank. And yet his solitary trek in Antarctica was extraordinary—indeed, Sir Edmund Hillary called it “the greatest survival story in the history of exploration.”

David Roberts, a mountain climber and author of many books about climbing, takes Hillary’s encomium as the subtitle of his new book, Alone on the Ice, a thorough history of Mawson’s Australasian Antarctic Expedition. The goal of the 1912 expedition was not the pole: that fanatic quest didn’t interest Mawson—in fact, he turned down Scott’s invitation to join his last, fatal, journey. Mawson, a scientist, longed to explore this unknown region, and he organized his men into small groups who would fan out in different directions to cover thousands of miles, gathering data. He himself, accompanied by Gustav Ninnis and Xavier Mertz, set out to explore the area far east of their Winter Quarters at Cape Denison.

Mawson was a careful planner –nonetheless, disaster occurred. When he and his companions were about 300 miles out on the ice, Ninnis fell into a crevasse, along with the bulk of their food, crucial supplies, and the six strongest dogs. Now five weeks out from Winter Quarters, with only one-and-a-half week’s rations of food, he and Mertz headed back, improvising protection against the climate, killing and eating the dogs, but growing increasing weak and ill. With one hundred miles still to go, Mertz died. Mawson carried on, rationing his food into meager portions, pulling himself out of deep crevasses, and tending as best he could to his deteriorating body, even crawling when necessary.

Roberts writes in great detail about the entire expedition—the geography, the discoveries, the personalities of individual men. Lengthy quotes from various journals as well as Mawson’s book, The Home of the Blizzard, help bring us the experience as seen by the participants themselves. Because the expedition was so complex, the narrative can get diffuse as we follow the various groups—a structural problem Roberts notes. Wisely, he opens the book with Mawson’s own journey and Ninnis’s death, allowing readers to anticipate returning to that story, which is the heart of the book. Photographs by the wonderful Antarctic photographer, Frank Hurley, a member of the expedition, bring home the icy, windswept reality of Mawson’s incredible feat.