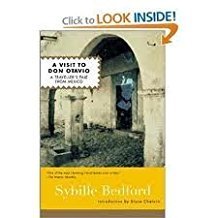 A Visit to Don Otavio was the first book published by Sybille Bedford, a novelist and journalist admired for her intelligence, wit, and prose style. Originally published in 1953 as The Sudden View: A Mexican Journey, the book was wisely reprinted by Dutton in 1986 and renamed with a title that is at once slightly misleading and also more apt. Misleading, because much of the work focuses on other Mexican travels ; apt, because the visit to Don Otavio is the centerpiece of the work and Otavio himself unquestionably the star.

Having spent the war years in the United States, Bedford was about to return home to England when she decided she wanted to travel. Her destination of choice was Peru, but, unable to make arrangements, she accepted Mexico as a substitute. Setting off with her American companion, E., the two women met up later with E’s cousin Anthony, who, through some young men he met en route, received an invitation to visit their uncle, Otavio.

The Hacienda San Pedro, on Lake Chapala, turns out to be a paradise—“Happiness Found,” as Bedford calls this section of the book. Otavio, she observes, was “one of the kindest men I ever met.” The son of an ex-governor of the state, Otavio has remained behind as his older brothers have moved away to work and establish families. He lives in the Villa, and looks over the Hacienda and all the property. Unmarried, he has 17 servants to look after him, and to look after in turn.

“Don Otavio keeps house all day,” writes Bedford in a paragraph that gives the flavor of the man and daily life at San Pedro. “He appears on the terrace of the villa and claps his hands. Ninos the papayas must be picked. Nino, there are roses again in the water tank. Has the boat gone for the butter? Has Jesus made it up with his wife? Has Carmelita been able to do something about the spell on the tomatoes? Would she like the priest?”

Encounters with the eccentric ex-pats who live on the lake add quirky entertainment and perspectives to the mix. The bossy Richard Middleton thinks that Otavio is “shiftless” and that his older brothers have “done him out of everything.” But old Mrs. Rawlston, a tough American southerner who sleeps outside nights with a gun, believes that Tavio is very clever and got the best of his brothers, who had to leave idyllic San Pedro, while he got to stay home and now has “the run of the place.”

At one point, the brothers and wives turn up, to discuss turning the Hacienda into a hotel, and in a series of hilarious scenes, Bedford describes the complex relationships and the issues that arise. Through it all Otavio moves with exquisite tact toward all. In the end, he tells Bedford, “there has been a general disgust and now there will be no hotel.”

I was sorry to leave San Pedro, where the best of the book takes place, but throughout her travels Bedford writes about people with compassion, comments astutely on Mexican life and history, and describes her difficult travel with wonderful humor. My favorite line occurs when she and E., desperate to get out of Mazatlan and unable to get a plane (all full), a boat (nonexistent), or a train (a wait of days), consult the barman where they are drinking. “Why don’t you take the train of the day before yesterday?” he asks, explaining that it is very late—of course—and will arrive that night.

Bedford called A Visit to Don Otavio a novel, and a note at the start advises readers that the characters are fictitious and the incidents compound. No doubt Bedford was more scrupulous in admitting this than some travel writers have been. But if it is impossible to know precisely what in this “traveller’s tale” is fact, all of it has the ring of authenticity.

What a delightful book. It was especially fascinating to me, because my parents started visiting the Lake Chapala region, where the book is largely set, only about 35 years after Bedford's visit, which seems to take place in another century altogether: no roads, no doctors, and 17 servants. On the other hand, I now see that the origin of the calamities my parents endured --watermelon-sized potholes, a robbery/kidnapping, and thoroughly corrupt police-- have their origin in the very recent past! Thank you so much for the recommendation.