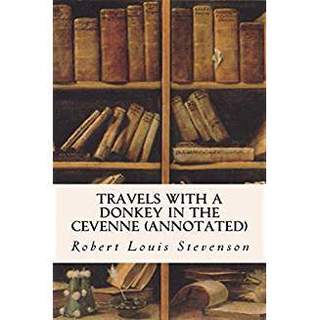 The sleeping sack was a novelty—“a child of my invention,” as he calls it. But he himself, as he observes, was a novelty. “A traveller of my sort was a thing hitherto unheard of in that district. I was looked upon with contempt, like a man who should project a journey to the moon, but yet with a respectful intent, like one setting forth for the inclement Pole.”

His journey, described with humor and quiet drama, does not start well. His pretty donkey, Modestine, will not move, the few inhabitants of the bleak country he is traveling through are unhelpful, and one night he gets altogether lost and sleeps out unprepared, his only nourishment Bologna sausage and chocolate, which he confesses he eats together, washed down with “revolting” brandy.

Fortunately things improve as Stevenson moves south. Having replaced kindness with a goad—a horrid implement I found painful to read about—he has quickened Modestine’s pace, and he enters the beautiful region of Gevaudan and the Valley of the Tarn. Religious observations, begun earlier on an entertaining visit to a Trappist monastery, permeate this part of the journey—appropriately, as this is the land of the Camisards, protestants whose 1702 rebellion was crushed by the Catholic church. Relating their story as he reaches points of historical interest, he tries to probe their spirit and observes how peacefully Catholics and Protestants now live together in what remains, despite the brutal Catholic victory, a Protestant region.

This is a thoughtful book, filled with witty comments on the people the author meets and above all wonderful descriptions of the physical world. In one delightful section, "A Night Among the Pines," Stevenson reflects upon sleeping outdoors. “Night is a dead monotonous period under a roof; but in the open world it passes lightly, with its stars and dews and perfumes, and the hours are marked by changes in the face of Nature.” Having thoroughly enjoyed his stay—“the room was airy, the water excellent…I say nothing of the tapestries or the inimitable ceiling”—he decides to leave money on the turf for the night’s lodging. I couldn’t help but hope that poor Modestine enjoyed the night outdoors as well.