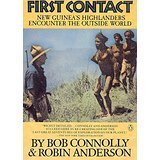 For most Americans, the story told in First Contact will be new. Apart from anthropological works, few books have been written about New Guinea, a country we hear little about. Indeed, although I lived in New Britain—a part of Papua New Guinea—I was unaware of the fascinating history of the first white exploration of the Highlands recounted here.

The story begins in the 1930s, when an Australian adventurer, Michael Leahy, and his brothers set out to find gold in New Guinea. At that time, New Guinea was a League of Nations mandate administered by the Australians, who believed that the interior of the island was uninhabited. As the Leahy brothers discovered, this was hardly the case. Making their way through the dense bush, they found a region populated by hundreds of thousands of inhabitants who had lived in such isolation from the outside world that they had never seen a white person before.

Writing fifty years later, Bob Connolloy and Robin Anderson recreate the dramatic, sometimes brutal confrontation between these two groups. Drawing not only on Michael Leahy’s journals and his extensive photographic record, they also interviewed many of the New Guineans who experienced this first invasion of their territory. Their initial response was a mix of confusion, surprise, and terror: Were these white people their ancestors returning? Were they spirits? And what on earth were these flying machines? As these Highlanders, now elderly, describe it, the shock of the strangers was so strong that the memories have stayed vivid even after fifty years.

The authors are evenhanded in their treatment of this material, describing the Highlanders’ culture with respect and enabling us to understand rather than simply condemn the colonialist intruders, though they by no means hide their arrogance and bigotry or the fact that they and their carriers killed at least forty-one New Guineans. As Connolly and Anderson observe, at least the colonial experience in New Guinea was short-lived: the country became independent in 1975. Nor was that experience as ugly as it was in other colonized lands. But as the interviews and amazing photographs make clear, in this deeply disruptive encounter and the contact that followed, a world was shattered and ultimately lost.