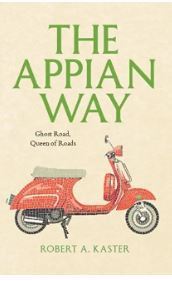 Like many travel books, The Appian Way, by Robert A. Kaster is cast as a road trip—and what an extraordinary road it travels. The longest road in Italy, extending from Rome to Brindisi in the south, the Appian Way was conceived by Appius Claudius Caecus near the end of the 4th century bc. The first great road of Europe, it bears the ghostly imprint of the countless soldiers, tradesmen, farmers, and pilgrims who have traversed it. It is a road saturated with history.

Kaster, a professor of classics at Princeton, had spent little time in Italy and was especially unfamiliar with the south when he set out on this journey with his wife. His aim was to explore the Appian Way “for all it was worth” and bring to life places and events he had been lecturing about for years. The two started out on the section of the road near Rome, then drove down to Brindisi and traveled the road from the other end, a journey he describes in five segments.

Along the way, Kaster evokes historical events, he quotes the comments of Dickens, Hawthorne, and Goethe on their own impressions of the road, and he tells stories, old and new. He takes delight in discovering that the people in modern Benevento still identify with the ancient Samnites and continue to exult in their defeat of the Roman army at the Claudine Forks. He writes personally and movingly about the life and death of Cicero, a figure who, as he says, tends to provoke either “loathing or affection.” Throughout he makes us aware of the physicality of the Appian Way, its variability, its beauty, and the difficulty involved in its construction, a task consigned to slaves and criminals who, he observes, “were not expected to survive the experience.”

This is a slender, compact book, which, like the Appian Way itself, is saturated with history. But though erudite, it isn’t dense. Conversational in tone, organized to be useful to travelers, the book takes us on a journey with a personable and extremely knowledgeable guide.