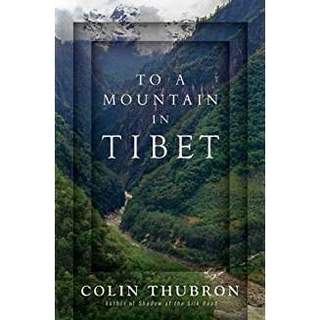 Mt. Kailas, in Tibet, says Colin Thubron is “the most sacred of the world’s mountains—holy to one fifth of the earth’s people.” To believers, “the earthly Kailas is a ladder between light and darkness—its foundations are in hell—and a site of redemptive power.” Indeed, to Hindus, “‘departure for Kailas’ is a metaphor for death.”

Death is very much on the author’s mind as he makes his way through Nepal to join the many pilgrims who will circumambulate the mountain. Not long ago, his mother died, and he is now the last of his family; he lost his father earlier, and his sister was killed years ago, at 21,in an avalanche in the mountains of Switzerland. He is going to Mt. Kailas to mark their passage. He is also going because he is a traveler: travel is his profession, it is what he does.

It’s a long journey and as he travels he reflects on the landscape, the history and myths of Tibet, on Buddhism and on religion more generally, and on the individuals he briefly meets along the way. There is a density of information tucked into this short book. Throughout, he comments poignantly on the destruction the Chinese brought to this spiritual country, in their 1959 invasion and subsequent occupation: “By 1976,” he observes, “out of more than 6,000 monasteries and temples, thirteen remained.”

But though Thubron is nearly always on the move, I found To a Mountain in Tibet surprisingly static. It seemed to me weighed down by the overwhelming amount of description woven through the text. Thubron is an excellent writer and his descriptions are finely wrought, but with such an overabundance I came to feel that I was looking at words rather than scenes, thinking about Thubron’s phrasing rather than the landscape he was seeing.

The strongest part of the book, I thought, took place on Mt. Kailas itself. The circumambulation of the mountain is a strenuous ordeal: the pass of Tara is at more than 18,500 feet. People die on this pilgrimage, unprepared for the altitude, the cold, the stress. Tour operators bring along pilgrims who aren’t capable of the journey but are fixed on the redemption the sacred mountain offers, the “release to a new life.” Thubron himself entertains no such hope: for him this is a secular, if personal, journey. Like many travelers to Tibet, he remains an outsider, groping to understand the deep spirituality that marks this ancient culture.