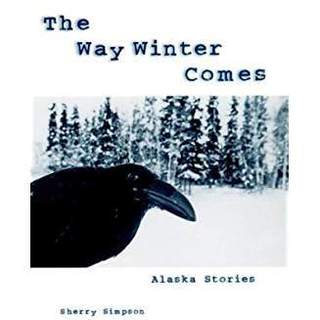 For the armchair traveler, books about place provide a kind of journey, and in The Way Winter Comes, Sherry Simpson takes readers deep into Alaska. In these 8 essays, she writes her way through an icy landscape, describing, reflecting, and pondering.

Alaska, of course, is not all one place. As Simpson observes in the title essay, a meditation on winter, “The fundamental grammars of darkness and cold seem familiar enough throughout Alaska, but the idioms of climate and geography make each place exotic and difficult in its own way.” Growing up in Juneau, now living in Fairbanks, she finds that in the high Arctic—Barrow—where she is visiting an archaeological dig, she is a “stranger.”

Most—and the best—of the essays focus on wildlife, which she writes about with respect, curiosity, and fascination. In the majority of these, she goes about with an expert, who not only gives us firsthand knowledge of the animals, but also introduces us to Alaskans. Conversations with these hardy, down-to-earth people serves to ground the language in the essays and keep the wonderfully lyrical from growing vague.

In “Where Bears Walk,” on Admiralty Island—“the Manhattan of the bear world,” where there are “more bears…than in the entire continental United States”—she confronts her fear of these huge creatures, and observes: “It is our weakness to hate what is stronger than we are.”

In “Telling Raven Stories,” she reflects on these intriguing birds, who seem able to eat anything and come to town to scavenge—after all, she says, “eating moo goo gai pan out of the Chinese restaurant’s garbage is much easier than locating a moose carcass in the forest or chasing voles.”

And in “Strange Grace,” visiting moose and their tiny calves, most of whom will not survive their first year, she creates empathy for this animal, who people tend to view as merely awkward: while “we drape with legends the animals we identify with, the bearers of desirable traits—beauty, wisdom, speed, killing strength, mystery, intricate powers of language and reason,” we tend to ignore the moose. “Who will give the moose a story?” she asks.

Although this was Sherry Simpson’s first book—I have yet to read the others, but I will—she seems here already entirely immersed in her setting, providing many stories for a place and all its inhabitants, even the moose.