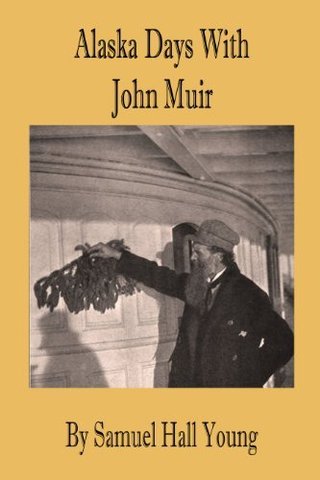 S. Hall Young was a young missionary in southeastern Alaska when John Muir arrived there in 1879. The two men immediately formed a friendship that lasted throughout their lives, and in 1915, Young wrote this slender book, which is both an engaging description of their adventures and a homage to the great Scottish naturalist, explorer, and founder of the Sierra Club, who opened the author’s eyes to the beauty around him.

If Young’s mission was to work with and convert the Thlinget, Muir’s was to explore the forests, the mountains, and most especially the glaciers, which Young calls “Muir’s special pets, his intimate companions, with whom he held sweet communion.” Muir particularly liked going out on the glaciers in storms, “for their exhilarating music and motion,” as he wrote elsewhere: “For many of Nature’s finest lessons are to be found in her storms.”

The two shared explorations, including a six-week canoe trip through uncharted territory, and Young describes Muir as pretty much unstoppable. The author, unfortunately, could follow only so far, having injured his arms years before. Indeed, on their first outing, while climbing, Young dislocates both shoulders and is stranded at the edge of a precipice till Muir, an extraordinary rock climber, uses every muscle (and even his teeth, to lift Young by the collar!) to rescue him. It’s a gripping scene.

Young himself is an upbeat fellow with a sense of humor. I enjoyed his depiction of Muir engaging in what the author calls “amatory botany,” cooing to the flowers as he puts them in various pockets: (“Ah! my blue-eyed darlin’, little did I think to see you here. How did you stray away from Shasta?”); and Muir’s response to the overload of seal-grease served by their Indian hosts, even on the berry dessert: “Mon, mon!” says Muir, “I’m fashed we’ll be floppin’ aboot i’ the sea, whiles, wi’ flippers an’ forked tails.” A strong section of the book revolves around his adventurous dog Stickeen, who fell in love with Muir, followed him across the most challenging glaciers, and years later became the subject of Muir’s own delightful story, Stickeen.

Young writes respectfully of the Thlinget and other tribes—though of course he calls them “simple”—but it seems to me doubtful that their own account of things would match his. It’s also debatable whether Muir actually said the words Young ascribes to him, since the author says at one point he wasn’t writing descriptions down. But since Muir approved the opening chapters of the book, I assume Young has captured spirit.

Certainly that spirit comes through. Late in the book we meet Muir in California, where he is managing a profitable fruit farm, longing for the mountains, and lamenting his fate: “I am losing precious days. I am degenerating into a machine for making money,” he says. “I am nothing in this trivial world of men.”

Like many older books, Alaska Days With John Muir has a refreshing innocence, strengthened in this case by the pristine beauty of the icy landscape and the character of its remarkable subject.