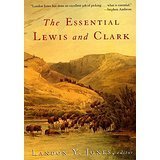 These journals bring to life this extraordinary journey, which covered 8000 miles, much of it through territory unknown to white Americans, and took 28 months—so much longer than they expected that many people had given them up for dead before they returned. Jones includes entries from both men’s journals, and as he observes, their writing styles are quite different, reflecting their different personalities. Lewis writes a more elaborate, reflective prose, while Clark is more straightforward; each contributes to a picture of life on the ground.

They describe the magnificent landscape, evoking what the country must once have looked like. They describe the animals they find, many of them unfamiliar, like the prairie dog and the grizzly bear, which impressed them hugely with its size and strength. And as they relate the hardships they endure, especially crossing the Bitterroots, they reveal a group working in remarkable harmony.

Judging by these excerpts, the explorers made an effort to treat the Indians they met peacefully, and they speak with real respect for some of the tribes that treated them generously as well. In retrospect, it is hard not to react with a sad headshake when Lewis, sorry to find that a group of Indians don’t trust them, tells his guide that if they were acquainted with white men they would know better, because “among whitemen it was considered disgracefull to lye or entrap an enimy by falsehood.” But Lewis was clearly sincere.

These journals are filled with wonderful incidents. One of my favorite episodes took place in 1805, when, Lewis tells us, an Indian woman “who had been assisting in the transportation of the baggage halted at a little run about a mile behind us…I enquired of Cameahwait the cause of her detention, and was informed by him in an unconcerned manner that she had halted to bring fourth a child and would soon overtake us. In about an hour the woman arrived with her newborn babe and passed us on her way to the camp apparently as well as she ever was.”

Jones, though he edited punctuation, kept the original spellings “in all their rococo glory”—and they’re a delight. Clark, he notes, has 27 spellings for the single word “Sioux,” which could become “Seauex,” “Suouez,” or even “Cocoux”! And those obsessed with the current confusion of “its” and “it’s” may be surprised to find that the usage is abused throughout the journals.

Jones has done a fine job of abridging this massive work. Reading these excerpts gave me a new understanding of Lewis and Clark’s journey, and whetted my appetite to read more. I have only one significant complaint about the volume: Why on earth are there no maps?