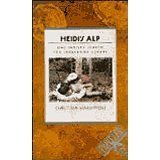 Heidi’s Alp: One Family’s Search for Storybook Europe
By Christina Hardyment. Atlantic Monthly Press, 1987, 258 pp.
“The greatest travelers travel alone,” wrote John Julius Norwich, in A Taste for Travel. Maybe so. But some very fine travelers travel with families, and their books can be just as engaging.

In Heidi’s Alp, Christina Hardyment recounts the 7-week journey she took with her four daughters, ages 5 through 12, to explore the roots of European fairy tales. As they travel from their Oxford home to Holland, Denmark, Germany, Italy, Switzerland, and France, the author describes the adventures with the children while reflecting on the stories of Hans Brinker, The Little Mermaid, the Pied Piper, Pinocchio, William Tell, and Babar. Fairy tales these may be, but as Hardyment relates them to their authors and the cultures from which they emerged, they are fascinating for adults as well.

Because Hardyment’s husband can manage only one month off, her companion until Hamelin—where he catches up—is a friend and her baby, who add incident and bodies to the already full campervan. But her true companion on the journey is Hans Christian Andersen, who was apparently not only a complex figure and author, but also a travel addict: “To travel is to live,” he once wrote. Intrigued by this highly original artist, Hardyment probes his life and work, commenting not only on well-known stories, but also on lesser-known tales—ones I’d certainly never heard of—like the dark and eerie “The Shadow.”

Although Hardyment felt an obligation to create an “educational” trip for the children—after all, she was taking them out of school for many weeks—she was aware that dragging them to museums and churches wouldn’t really work. She balances this admirably. While they visit Tivoli and Legoland, they also take in many cultural sites and, most importantly, they are introduced to other cultures—the foods, the customs, the different ways of behaving. Their responses to what they see—as varied as their personalities—are lively and interesting.

For the family, the highlight of the journey is a chance to stay overnight in an old man’s mountain cabin in Heidi territory, where they drink milk warm from the cow (those of them who can stomach it) and even get to see the cow being milked. For me, the high point was the intriguing story of the Pied Piper of Hamelin, which seems to be based on a true story of the disappearance of 130 children from the town in the 13th century—an event that, despite much historical research, no one yet really understands.

I thoroughly enjoyed this book, which is well-researched, literary, and entertaining, and I plan to use Hardyment’s excellent bibliography to read the best translation of Andersen’s (often poorly translated) tales and find the works too often ignored.