Review: Dispatches from the Ends of the Earth 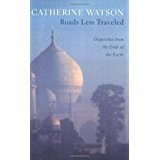 Catherine Watson sensed her vocation early. “By high school,” she writes in her author’s note, “I thought of myself as a ‘tourist in life,’ someone whose actual earthly purpose was going away. Only later, when I’d become a journalist, did I comprehend the rest of the assignment: coming back and telling about it.” In Roads Less Traveled, she conveys her enthusiasm both for the traveling and for the telling.

The 40 short essays in the book cover a wide territory, from North Dakota to Turkey, from Newfoundland to Lebanon. Drawn from the pages of the Minneapolis Star Tribune, where Watson was travel editor for 30 years, most of the pieces are, as you’d expect, upbeat. In Borneo, she enjoys working with Earthwatch at Camp Leakey, where she and other volunteers “follow” orangutans. In Petra, she is fascinated by the pink sandstone structures of the Treasury. In Antarctica, she is entranced by the wildlife—so entranced she gets too close to a Gentoo penguin chick, who bites her. But she is also willing to be down on commercialized Bali, to reflect on our history in Vietnam, and to face without shirking the poverty in Honduras.

For the most part Watson describes trips that ordinary travelers—her audience—might take. But two of my favorite essays describe more Extreme Adventure. In “Rafting the Himalayas,” she, her guides, and her companion rescue a sacred cow who has somehow managed to get itself stuck in the river’s boulders; and in “To the Top of Africa,” she climbs Mt. Kilimanjaro, a goal she has hoped to achieve since she was seven years old.

These vivid, unpretentious essays skillfully interweave personal anecdote and research, and invite readers into the author’s experience. If some are too slight to make a mark, many, I suspect, might make you think about making the journey yourself. “If you go,” as destination pieces always say—if you decide to watch gray whales in Baja or see the stone fences on the Aran Isles—Watson isn’t the guide to tell you what to do, or where to stay, or what to eat. What she provides, by example, is excellent guidance on how to travel well.